The Bottom Line: Romantic suspense fans will lap up this blistering tale of revenge, terror and sex. 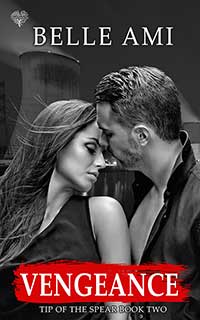 Set years after Belle Ami’s first Tip of the Spear book, in which Harvard student Layla Rose Wallace was kidnapped in Dubai, the adventure-seeking beauty finds herself in captivity once again. Now married to a Mossad agent and the mother to a four-year-old daughter, Layla is curating a major art exhibition at New York’s MOMA when a restaurant is blown up and she’s taken hostage by Iranian terrorists.

Soon, Layla’s husband Cyrus Hassani finds himself watching a videotape featuring Layla reading a prepared statement while two men point assault rifles at her head. While Cyrus is devastated, he’s an expert at compartmentalizing his emotions to ensure that even minor details won’t slip past him. Just before the recording ends, he catches his wife mouthing something that he’s sure must be an important clue.

On the surface, kidnapper Ali Zandi appears to be just another extremist waging jihad. Secretly, however, his sole focus is luring Cyrus into his trap, and that’s the driving force behind this fast-paced thriller. While you have to feel sorry for the twice-kidnapped Layla, she’s in fact far less interesting than her badass husband, Cyrus, whose energy lights up any page in which he appears (and at just 217 gripping pages, most readers will plow through Vengeance in a weekend). In some ways, much of the novels’ early chapters feel like foreplay for an eventual showdown between savior and villain.