The Bottom Line: A truly memorable police procedural for the 21st century. 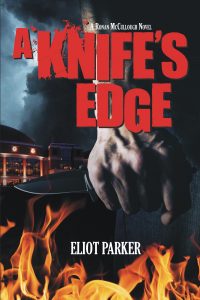 Trouble has a way of finding middle-aged Charleston Police Department Sergeant Ronan McCullough. While he appears in uniform at the dedication for a new children’s cancer center, it’s to support his boyfriend, Ty, an ER nurse. But those plans change when a vehicle slams into the building. Moments later, he discovers the driver slumped over the wheel, the victim of a gunshot. And in the trunk, the butchered body of Sarah Gilmore, a woman with curious ties to Ty and a key witness in a seemingly unrelated case.

Parker, author of the excellent crime thriller Code for Murder, has created an intriguing whodunit that feels entirely fresh. That’s largely thanks to the characterization of Ronan, a cop who is undercover in more ways than one. McCullough’s life is a tangle of secrets.  As a plainclothes operative in Charleston’s Metro Drug Unit, his anonymity is essential. More interestingly, he’s a closeted gay man who’s secret is closely guarded from the rest of the department by his investigative partner, Eric.

The quest to uncover Sarah Gilmore’s true identity and what ultimately led to her death is more than enough for most readers, especially as Ronan takes potentially explosive professional and personal risks to gain access to people and information. The book is at its best when any of Ronan’s secrets are threatened.  Early on, he’s visibly unnerved when a hospital resident recognizes him from news coverage, which Parker writes brilliantly without too much fanfare, letting the tension build until they are superseded by higher stakes. Ultimately, the book is about secrets – those that Ronan keeps, and those that he uncovers in the line of duty. It’s a winning formula that will keep readers engaged until the very last page.

Death by the River, an Addictive Teen Thriller by Alexandrea Weis and Lucas Astor
The Best Thriller Books of 2018