The Bottom Line: A deliciously dark and timely teen crime thriller deserving of a TV series. While tackling heavy-duty subject matter with grace and sophistication, Death by the River is tailor-made for fans of Riverdale, Twin Peaks and Twilight. 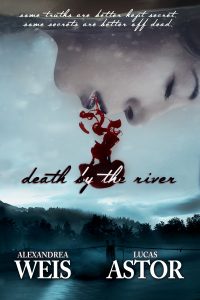 A monster lurks in the halls of Louisiana small town St. Benedict High School, and his name is Beau Devereaux. As high school students go, Devereaux is as close to an all-powerful deity as you can get. He’s the school’s star jock, and his parents’ company is the town’s biggest employer and benefactor.

Beau is also a loathsome sexual predator who uses fear and his family’s power to keep his victims silent. Given his uncanny ability to conceal his dark secret, he can have just about anyone he wants. Except, naturally, the person he can’t have: Leslie, the twin sister of his girlfriend, Dawn.

When it comes to evil, Beau is only just beginning to realize his true potential. The question is, who’s going to stop him?

Authors Alexandrea Weis and Lucas Astor have structured the novel like a classic horror tale, in which the antagonist is known from the get-go. But thanks to a fully realized world and an intrepid cast of characters, there’s still plenty of suspense. The Devereauxs live in a gated Greek revival mansion that was built before the civil war that reeks of inbreeding and trauma. Meanwhile, the abandoned St. Francis Seminary on the banks of the Bogue Falaya River, known as The Abbey, creates a tangible sense of dread at every mention.

But ultimately, it all comes down to this – are the girls of St. Benedict High capable of vigilante justice? There’s Dawn and Leslie, who as twins go, are unusually competitive. And Zoe, the overly protective best friend. Andrea, who possesses a powerful, intimidating libido and isn’t afraid of the dark side of human nature. And Taylor, the new cheerleader at school from Los Angeles, who may just have a score to settle.

Death by the River has the makings of an addictive teen crime series. Let’s hope Weis and Astor are plotting a sequel.