The Bottom Line: In Pine, Baldacci achieves his deepest characterization yet. Highly recommended. 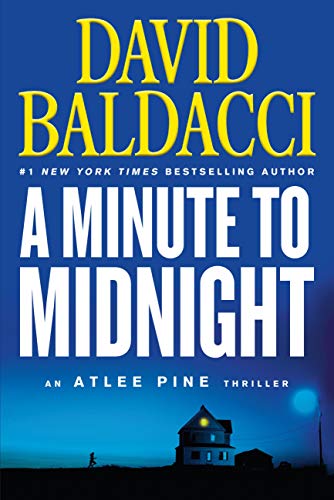 In Baldacci’s second Atlee Pine novel, the FBI agent explores the kidnapping and presumed death of her twin sister 30 years earlier. Like Harry Bosch in Michael Connelly’s similarly emotional crime thriller series, Pine decides to head back to the scene of the crime in order to solve it. As we all know, trouble follows all fictional investigators.

The story takes Pine back to rural Georgia, where as luck would have it, a killer is once again at work. A local woman is found ritualistically murdered, her face covered with a wedding veil–and the first killing is quickly followed by a second bizarre murder. Pine turns her attention to stopping the serial killer before they can strike again.

But as you have surely already guessed, her investigation will raise both questions and answers about the murder of her twin three decades earlier.

While A Minute to Midnight may be one of Baldacci’s more predictable plot lines – many readers will see its twists and turns coming a mile away – he has found gold in Atlee Pine’s backstory. Every moment seems authentic and charged with emotion. With characterization this rich, we’ll follow Pine anywhere she wants to lead us.