The Bottom Line: Yellow Death is an irresistible medical thriller with the urgency of Contagion and the gritty conspiratorial intrigue of Narcos. One of the year’s best thrillers. 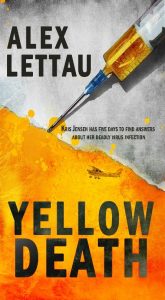 When two cases of fatal hepatitis C are reported in a small town, the Centers for Disease Control (CDC) sends medical detective Dr. Kris Jensen to Mississippi to investigate. Both victims were junkies. A fatal hep C cluster is almost unheard of, and Dr. Jensen becomes convinced that a previously unknown virus is responsible for the deaths.

And what could be worse than an outbreak of an unknown disease? Losing the expert charged with the investigation. While drawing heart blood from a corpse, Dr. Jensen is accidentally stuck with a needle and infected with the fatal mystery disease.

Author Alex Lettau, the pen name of an American infectious disease specialist, sets the hook deep and early with a series of fast-paced early chapters that would translate well to the big screen. Lettau frames Dr. Jensen with a truly unique conundrum: does she tell anyone she’s infected? If she does, she would surely get pulled off the investigation into the outbreak, which could lessen the probability of finding answers to the virus’ origin.

After heading to New Orleans in search of a “sparkly” new heroin that could be the cause, she uncovers a conspiracy set in motion by another federal agency. The futility of the war on narcotic drugs, and the blowback by heavy-handed American tactics, has rarely been more smartly illustrated. The entirety of the investigation feels authentic, from the motivations of shadowy DEA agents down to the sketchy lab test results.

Just as the stakes seem as high as they could possibly get, Lettau raises them again: when Dr. Jensen travels to the Venezuelan jungle to investigate the origin of the virus, she finds that her infection isn’t the only thing threatening her life.

Cemetery Road, an Epic Conspiracy Thriller by Greg Iles
A Minute to Midnight, a Riveting New Thriller by David Baldacci