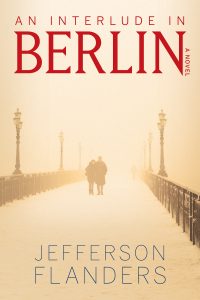 In An Interlude in Berlin, author Jefferson Flanders casts a foreboding Cold War spell over 1950s Germany. As American diplomat Dillon Randolph finds himself entrenched in a divided Berlin, he is himself at a crossroads, having gone through some issues of his own at his last post. An introspective and admittedly flawed character, Dillon finds himself putting in extra time working to prove himself, assuage his American colleagues, and deal with the tense political situation.

As the entire city worries about a Soviet ultimatum, Dillon has to navigate both politics and personal policy (along with a relationship with a prominent actress) to keep everything from imploding. Flanders has plenty of experience in the genre, which is evident in the polish of An Interlude in Berlin. The book moves quickly, but it’s peppered with subtle nuances and details that add to the novel’s emotional heft.

Dillon and Christa soon find themselves entrenched in the workings of a global political power struggle. Readers should pay close attention, as they may find that that they’ve been given subtle clues to the puzzle all along, if only they’d cared to look in Berlin’s dimly lit corners and clandestine clubs. Much like the work of John le Carré, Flanders avoids the jet-setting narrative in favor of examining the most minute details, since so many of them, such as a certain license plate or a not-so random run-in, will pay off big.

With previous efforts, Flanders established himself as one of America’s best historical fiction writers, with books spanning the 18th century American Frontier, China and France. As is his trademark, Flanders’s jump to the 20th century is a fast-paced trek through historical fact and a layered world of high-stakes intrigue that is both enthralling and exciting. An Interlude in Berlin proves that sometimes, keeping things streamlined is the best way to tell a story.