The Bottom Line: McFarren injects humanity into the art of supernatural storytelling, and the result is an exhilarating and thoroughly Shakespearean thriller. 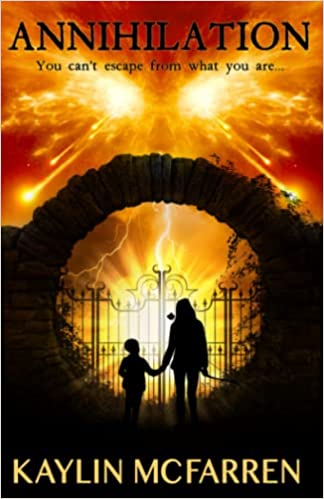 High school drama rules Samara Daemonium’s life. Rumor has it that her ex-boyfriend, Legend, broke up with her because she wouldn’t sleep with him. Stunning Samara has plenty of other options, but the sight of Legend with his new girl is eating her up inside.  Nosy high school counselor Lestat Gorgon – one of the book’s most delicious characters – suggests dating someone else to make Legend jealous: “You will have that weasel begging on his knees to have you back.”

There are any number of reasons why a high school guidance counselor might care about restoring a student’s reputation. In this case, Samara is the daughter of Crighton Daemonium, the Soul Seeker whom many refer to as “Your Majesty.” Whether she likes it or not, the young royal is about to become an essential player in an epic game of power.

Annihilation, the sequel to Kaylin McFarren’s award-winning Soul Seeker, is a decidedly Shakespearean thriller. Amidst the supernatural world, the novel is essentially a classic story about love, betrayal and power between and among royal families. Ruler of Hell Queen Lucinda orders her soldiers to prepare for a doomsday war with Heaven. A key strategy in her plan is devouring the souls of gifted demonic beings so she can claim and use their abilities, but conspiracies within her ranks pose a serious threat.

Meanwhile, Samara may be a normal teenager at heart, but she’s about to be thrust into a supernatural castle coup of epic scale. Her first taste of what’s to come begins when she agrees to meet Legend at a secluded cabin to talk things out. After being forced to hide during an attack, she emerges to find the cabin littered in blood-strewn bodies. McFarren’s blatantly “human” portrayal of her youthful obsessions in the early going set her up to be both victim, royal and a star in a wholly compelling coming-of-age story.

To get this most out of Annihilation, readers are highly encouraged to read Soul Seeker first.