The Bottom Line:  A riveting whodunnit featuring a truly creative killer and one of the most compelling new sleuths in the genre. 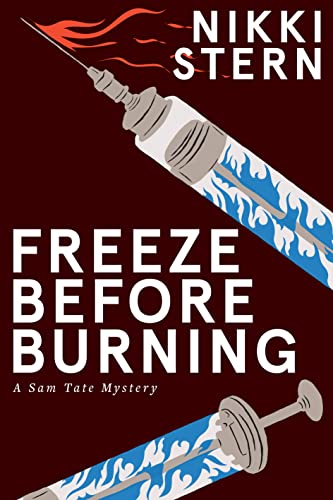 A serial killer is at work in New York City. The three seemingly unrelated victims – a priest, a librarian and a bartender – have been forced to swallow dry ice. And we’re not talking about a trace amount. Somehow, investigators believe, the victims may have somehow ingested several pounds of it.

Lieutenant Sam Tate is way out of her jurisdiction when a chance meeting with an old acquaintance draws her into the investigation. As news of the case goes mainstream, one of her colleagues back in Maryland quips, “What I don’t get is how you got yourself in the middle of a possible serial killing spree while on vacation.” One of the enduring rules of crime fiction, going back as far as the great Agatha Christie, is that detectives can never truly take a vacation. In Sam’s case, whether she realizes it or not, her “vacation” is actually a mission to solve a tragedy that she’s carried with her all her life.

As a little girl in New York, Sam attended a wedding with her family where a mass murderer killed or critically injured all but two guests, including her entire family. While author Nikki Stern has rendered Sam a “famous serial-killer-catching” pro, she’s also a human being attempting to make sense of the most tragic event of her life. Before she discovers the case that will soon make headlines, she visits the house she lived in as a child. She eats dinner alone in her “dilapidated rental cottage on a dead-end road.” For all her talent as an investigator, Sam’s vulnerability is what makes her so compelling. That’s why it’s so satisfying when, eventually, she begins making connections missed by investigators decades earlier.

At a time when most writers simply ignore the COVID pandemic, Stern uses it as an opportunity to illustrate the awkwardness (a handshake being replaced by a “cross between Star Trek and Wakanda Forever”) and obstacles (the difficulty in recognizing suspects in a library when all wore masks) the pandemic brought into society. Stern’s insights into this era complete a wholly tactile world that adds tension and suspense to an already riveting whodunnit.

Freeze Before Burning is a perfect introduction to first-time Nikki Stern readers. The novel works both as part of a series and as a stand alone mystery. Highly recommended.