What makes a great psychological thriller? First and foremost, a confounding mystery that is disturbing and at times nearly hallucinogenic. A compelling protagonist whose life is in constant danger. A juicy assortment of clues, both red herrings and genuine puzzle pieces, that don’t quite fit into place until the very end. And a master craftsman at the help who can simultaneously draw the reader in, confuse the hell out of them during the second act, and bring everything together for a final set of “ah-ha” moments.

With that primer, here’s our super-controversial list of the top psychological thrillers of the past decade.

5 – The Athenian Murders by José Carlos Somoza: This book came out in 2000 in Spanish, followed by an English translation two years later.  This thriller is not only psychological but explicitly philosophical.  Like many thrillers in recent years, it combines elements from other genres, in this case historical fiction and metafiction.  People familiar with the works and legacy of Plato will find this book particularly interesting.  You might spend eternity reading all the footnotes, but it’ll be worth it.

4 – Shutter Island by Dennis Lehane: How appropriate: a psychological thriller set in and around a mental hospital.  In Lehane’s gritty masterpiece, a marshal and his partner must journey to an isolated island that houses a facility for the criminally insane in order to find a patient who has gone missing. Or has she? Fans of Martin Scorsese’s film may find an altogether different experience reading Lehane’s gritty, unforgiving prose. 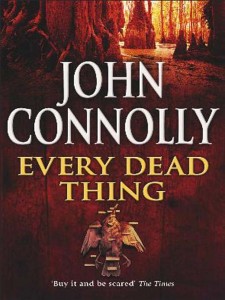 Every Dead Thing, by John Connolly

3 – The Hidden by Tobias Hill: Historical and archaeological studies can serve as remarkable metaphors for the study of the mind.  In Hill’s crafty world, an emotionally damaged academic gets himself a position on the staff of a dig at Sparta.  He realizes that several people on the dig have formed a secret group that sneaks off late at night and does…what, exactly?  Here, the secrets under the ground and those inside the mind both obscure and illuminate one another.

2 – A Day and a Night and a Day by Glen Duncan: On the surface, Glen Duncan’s book looks like a standard-issue political thriller.  However, the sadistic, slippery interplay between the nominal protagonist and his captors definitely pushes this book into psychological thriller territory.  Duncan’s protagonist is interesting enough, but in the tradition of great books of this genre, the villain (or is he?) is even better.

1 – Every Dead Thing by John Connolly: Publisher’s Weekly’s grim synopsis says it all: “One serial killer who tortures children and another who steals victims’ faces after mutilating their bodies give readers two grisly plots in one darkly ingenious debut novel.” Connolly weaves his elegant story from New York to the deep south, disturbing, confounding and ultimately satisfying his readers along the way.

One Response to Best Books: Top 5 Psychological Thrillers of the 2000s