I always feel a great sense of gratitude to be able to do what I do, but that feeling is perhaps stronger now than ever. I’ve been lucky to have discovered some amazing new voices in the mystery and thriller genre this year.

I Am Pilgrim by Terry Hayes

[easyazon_image add_to_cart=”default” align=”left” asin=”1439177732″ cloaking=”default” height=”450″ localization=”default” locale=”US” nofollow=”default” new_window=”default” src=”//ecx.images-amazon.com/images/I/61sOWE3akYL.jpg” tag=”bestthricom-20″ width=”300″]This pick is almost a cheat. Author Terry Hayes is definitely a new voice to mystery and thriller readers, but when it comes to storytelling, he’s a veteran. Hayes handled the novelization of Mad Max way back in the 1970s before writing the scripts for the Road Warrior, Dead Calm and From Hell. With I am Pilgrim, he has breathed new life into the spy thriller genre.

You can check out our review of Hayes’ new masterpiece here. Here’s the summary from the publisher:

A breakneck race against time…and an implacable enemy.

An anonymous young woman murdered in a run-down hotel, all identifying characteristics dissolved by acid.

A father publicly beheaded in the blistering heat of a Saudi Arabian public square.

Smoldering human remains on a remote mountainside in Afghanistan.

A flawless plot to commit an appalling crime against humanity.

One path links them all, and only one man can make the journey.

Finders Keepers begins with the tragic story of John Rothstein, an iconic author who created a famous character, Jimmy Gold, but who hasn’t published a book for decades (he seems obviously modeled after JD Salinger). 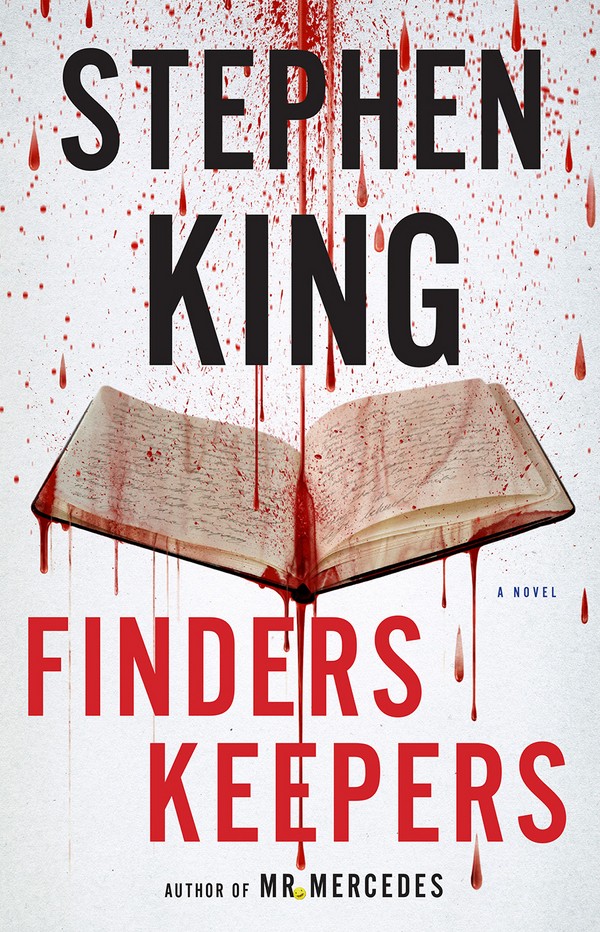 Morris Bellamy is livid, not just because Rothstein has stopped providing books, but because the nonconformist Jimmy Gold has sold out for a career in advertising.

Morris kills Rothstein and empties his safe of cash, yes, but the real treasure is a trove of notebooks containing at least one more Gold novel.

Morris hides the money and the notebooks, and then he is locked away for another crime.

Decades later, a boy named Pete Saubers finds the treasure, and now it is Pete and his family that Bill Hodges, Holly Gibney, and Jerome Robinson must rescue from the ever-more deranged and vengeful Morris when he’s released from prison after thirty-five years.

Check out our original review here.

The Girl on the Train by Paula Hawkins

For anyone who’s even mildly interested in thrillers, The Girl on the Train is a must-read.

Here’s the summary from the publisher:

Rachel takes the same commuter train every morning. Every day she rattles down the track, flashes past a stretch of cozy suburban homes, and stops at the signal that allows her to daily watch the same couple breakfasting on their deck.

She’s even started to feel like she knows them. “Jess and Jason,” she calls them. Their life—as she sees it—is perfect. Not unlike the life she recently lost.

And then she sees something shocking. It’s only a minute until the train moves on, but it’s enough.

Now everything’s changed. Unable to keep it to herself, Rachel offers what she knows to the police, and becomes inextricably entwined in what happens next, as well as in the lives of everyone involved.

Has she done more harm than good?

Compulsively readable, The Girl on the Train is an emotionally immersive, Hitchcockian thriller and an electrifying debut.

Here’s our original review, and here’s the publisher’s plot summary:

When former FBI agent William Harrison begins receiving mysterious postcards with the signature “Echo Tango,” he’s alerted to a deadly government cover-up beyond anything he ever thought possible.

His informant turns out to be a guilt-ridden ex-operative in the Saint Mary Project, an ultra-secret program engaged in alien contact. The organization is wiping out loose ends, and Echo Tango thinks Harrison is the man he needs to stop the decades-old conspiracy.

Thanks to a gunshot wound suffered in an attempt to thwart an armed robbery, the crime-fighting life is something of Harrison’s past. He keeps his shooting skills sharp but walks with a limp, and he is more likely to catch marital cheaters than anything else–as a private investigator.

But Harrison can’t shake the feeling that this paranormal case is meant for him. He enlists the help of colleagues and starts following the mysterious clues.

However, hired guns stand between them and the truth. There are also alien-human hybrids to contend with, but that’s not all. Harrison’s investigation also turns up a powerful secret about him and his family–a secret that may just be what lets him end these unimaginable crimes.

Will Harrison discover the truth and reveal the deadly alien contact conspiracy?

Skin in the Game by Tomas Byrne

Tomas Byrne made us believers way back in January (here’s our original review) with a globetrotting psychological thriller with that also managed to deliver a healthy dose of political heft. The book has subsequently made its way to #1 on several Amazon bestseller charts.

Skin in the Game is an intricately woven story of international political and corporate wrangling that takes readers on a fast-paced journey across Europe and the Middle East.

Trapped in a maze of secrets and lies.

When Joe Hawkins left the US State Department, he left international intrigue behind and took a prestigious position as a professor at Oxford University. His younger brother’s disappearance upends his tranquil academic life and plunges him into a world where covert government intelligence meets international high finance. His search for Sam will uncover his brother’s ties to a shadowy London investment firm and an insidious network of international corruption.

Can you trust your memory and senses?

MI6 psychiatrist Kate Farrow has cracked some tough cases, but when faced with a suspected terrorist suffering from torture-induced amnesia, she knows she’s in over her head. The clock is ticking, and Kate must unlock the secrets in his battered psyche to prevent the loss of innocent life. Only by discovering what lies at the core of her own identity will Kate find a way to separate the truth from a shell game of greed and exploitation.

The Martian, by Andy Weir

[easyazon_image add_to_cart=”default” align=”left” asin=”B00EMXBDMA” cloaking=”default” height=”500″ localization=”default” locale=”US” nofollow=”default” new_window=”default” src=”//ecx.images-amazon.com/images/I/41yZWcEnKqL.jpg” tag=”bestthricom-20″ width=”305″]Another winter release that we got wind of this year, and boy are we glad we did. We haven’t had a chance to publish a full review of The Martian yet, but needless to say, we loved it, and can’t wait to read Weir’s sophomore effort.

Six days ago, astronaut Mark Watney became one of the first people to walk on Mars.

Now, he’s sure he’ll be the first person to die there.

After a dust storm nearly kills him and forces his crew to evacuate while thinking him dead, Mark finds himself stranded and completely alone with no way to even signal Earth that he’s alive—and even if he could get word out, his supplies would be gone long before a rescue could arrive.

Chances are, though, he won’t have time to starve to death. The damaged machinery, unforgiving environment, or plain-old “human error” are much more likely to kill him first.

But Mark isn’t ready to give up yet. Drawing on his ingenuity, his engineering skills—and a relentless, dogged refusal to quit—he steadfastly confronts one seemingly insurmountable obstacle after the next. Will his resourcefulness be enough to overcome the impossible odds against him?

Death by Romance, by Anne Kennison

Richmond Homicide Detective Ryan Hamlin may be just a few months from the mandatory retirement age, but he’s hardly looking forward to spending his golden years in a rocking chair. So when the CEO of Virginia-based Taylor Industries is murdered on a snowy Virginia night, Hamlin is grateful for the distraction. 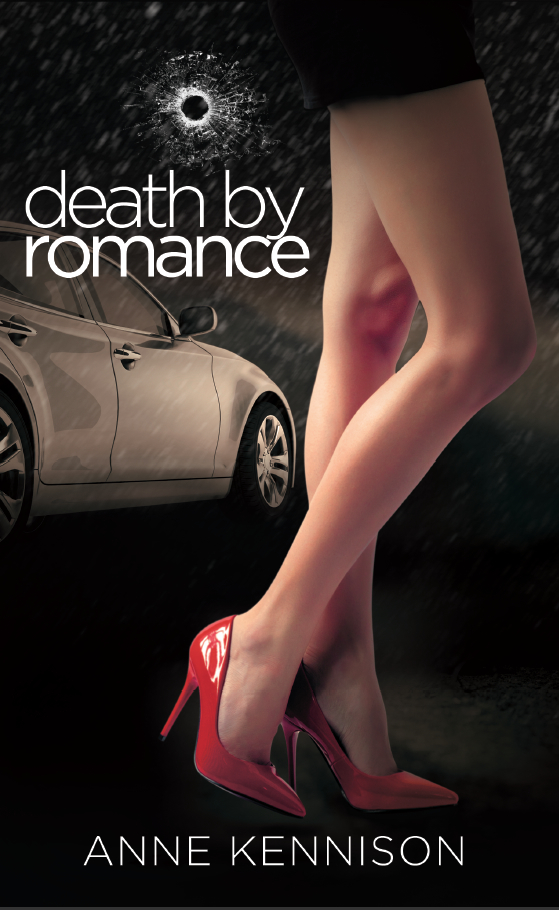 Hamlin’s investigation naturally begins with Gordon Taylor’s beloved wife, Jessica. She’s beautiful, but oddly, is also a loner (as Jessica herself astutely observes, after Taylor’s death, “there would be no casseroles from concerned neighbors this time”).

Hamlin soon uncovers a mysterious company called Romance, Ltd, registered in North Dakota. Perhaps the most morally audacious matchmaking service on earth, women such as Jessica are referred to as “Investments,” and for such women, no expense is spared in making them more alluring through college courses, “fat farms,” etiquette lessons or other means. Romance, Ltd then makes its money one of two ways: divorce or death.

Check out our original review here.

Homeowner with a Gun, by Samuel Hawley 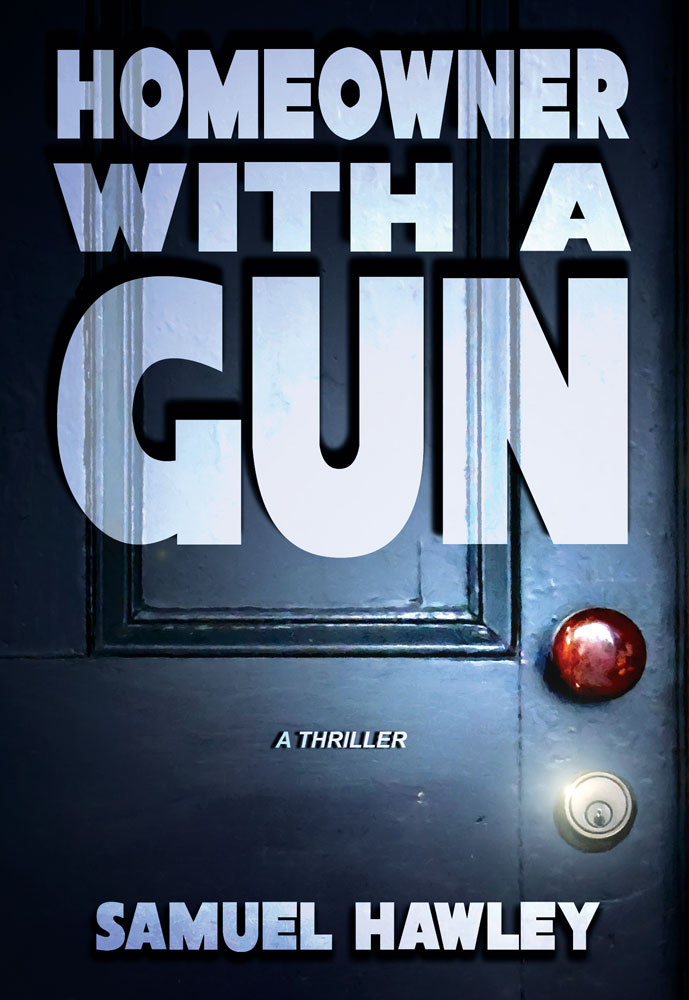 When his wife awakens him at 2:18 a.m., he comes to the startling realization that intruders have broken into their 1920s fixer upper.

He reaches for his handgun. Jeff’s tour of duty in Iraq may have been strictly food service, but thanks to his professional weapons training, he manages to kill both prowlers.

When daylight arrives, the shaken family man just wants to put the whole thing behind him. Until he receives a threatening phone call. Enter Thomas Montgomery, AKA “I-Man,” a hardened criminal and cousin to one of the dead intruders.

I-Man is working a dead-end job at a carwash to appease his parole officer, but he’s still involved in a dangerous street gang called ANG (“Ain’t No Game”).