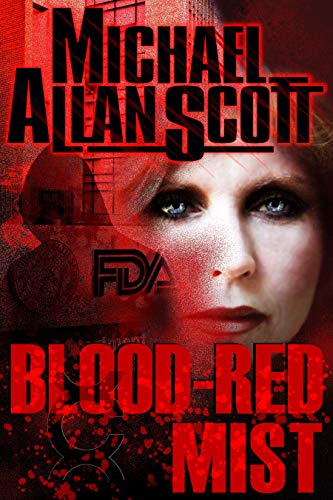 In Michael Allan Scott’s second Jena Halpern series book, the formidable psychic boards a plane to Washington, D.C., where her terminally ill stepfather is hospitalized in nearby Silver Springs Silver Spring. The trip is a powder keg of emotion, as the two haven’t spoken in years. At one time in the distant past, the two came perilously close to having an affair.

En route to the hospital, Jena instructs the Uber driver to change course and take her to the FDA Center for Drug Evaluation and Research. She’s not entirely sure why – it’s just a strong feeling. In alternate chapters told from the point of view of FDA Director Thomas A. Friedman, M.D., we gradually understand that Jena is right. Something is very wrong at the FDA. In exchange for ten million dollars and a trip to the Cayman Islands, Friedman is willing to approve a dangerous new antidepressant. But before that can happen, his contact goes missing.

Is there a connection between Jena’s stepfather’s lymphoma and whatever is happening at the FDA?

Blood-Red Mist finds Jena Halpern trusting her intuition and very real extrasensory powers. At the same time, she realizes that she is extremely vulnerable – the powerful physical effects of her visions have actually hospitalized her in the past. She must somehow learn to control them, and this inner struggle is one of the most compelling stories in fiction today.

Aside from Scott’s jaw-dropping character development, he has created a wholly believable medical thriller that is rooted in reality. Blood-Red Mist comes at a time when accusations about FDA corruption appears to be at an all-time high, and the consequences of big pharma’s seemingly unchecked power is terrifying. The book isn’t just one of the year’s best thrillers. It’s also one of the most important.