The Bottom Line: A hard-hitting serial killer thriller that deftly explores the homeless crisis and the role of law enforcement with unflinching realism. Highly recommended. 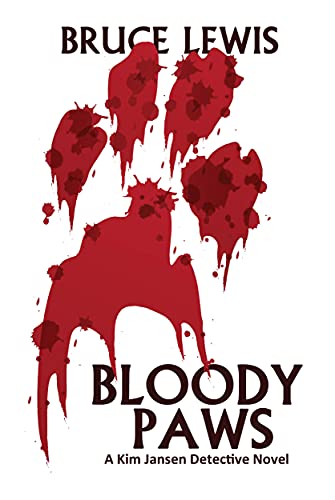 Bloody Paws begins with three executions in reverse chronological order. One may or may not be an act of mercy in a hospital, as a woman is taken off life support by her son with terrifying results. The second is an act of vengeance, as a gang rape victim executes a predator with steely-eyed conviction. In the third, a convicted serial killer – whose identity Lewis masks – is executed before a room of emotional law enforcement officers.

To say more about the connection between these disparate events would risk introducing spoilers, as half the fun in Lewis’ tautly woven plot is discovering the intersection and complicated moral compass of its primary characters, most notably Helen “Doc Helen” Williams and veterinarian Jim “Jimbo” Briggs. The same is true when it comes to the connection between these events and the animal community. What can be said is that despite the title Bloody Paws, Bruce Lewis’ serial killer thriller is nothing like Cujo or Pet Sematary. It’s far more nuanced and complex than either horror classic.

Above all else, author Bruce Lewis delivers a satisfying work of fiction by incorporating traditional prose, song lyrics, blog posts and news dispatches, all of which work together surprisingly well. But those following the news events in the Pacific Northwest concerning the role of police in society, the homeless crisis and even mental illness will find the book particularly informative. Lewis, who was a crime reporter for several California daily newspapers covering police and fire, is particularly adept at injecting realism into the narrative without dulling the story’s inherent suspense. Highly recommended.