The Bottom Line: The breathless, spellbinding saga of Cara Wynter continues to the delight of her growing fan base. 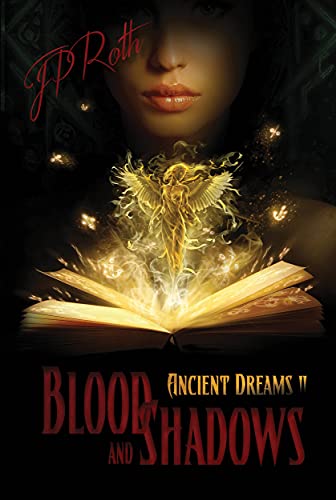 Blood and Shadows, JP Roth’s second series book, is a seamless continuation of the story that began with Ancient Dreams. That first series book told the tale of Cara Wynter, a daughter of witches who struggles with her lineage and the powers that have come with it. That includes trying her best to stamp it all out at the local watering hole. The discovery of a magical book that tells of a forgotten place and time sheds light on the troubling dreams and puts a perilous quest in motion.

Here we find Cara — a time walker — hovering between the world of the living and dead and watching helplessly as the man she loves bargains with otherworldly beings to save her and her soul from the spell of vengeful gods and goddesses.

But can the chains of her seemingly unchangeable destiny be broken when unbridled emerging powers, twisted murders and traveling between worlds are Cara’s new normal?

From the dark halls of Hades to the hidden mountains of Transylvania, Cara is caught in a web of spells, witches, mythical creatures and mercurial gods who threaten her daily and shake her very sense of what existence actually is. And worst of all, she continues to fall for the man who once traded his soul to save her own. Now, Cara has no choice but to walk through the fire as the horrors she tried for years to ignore come for her with a vengeance.

In this solid sophomore follow-up, Roth gives fans more of what hooked them in her debut showing: compelling female characters, a rich fantasy world, a tragic love story, meaningful relationships and dialogue that draw the reader into her world quickly.

Readers take note: You will absolutely want (and need) to start with Ancient Dreams before diving into this installment, or risk the wrath of the gods and be hopelessly lost, to boot. But that’s hardly a tall order for this delightful emerging series.