The Bottom Line: Every bit as addictive as TV’s 24 series, the fourth entry in the Spectre series evolves into a fast-paced, ripped-from-the-headlines political thriller. 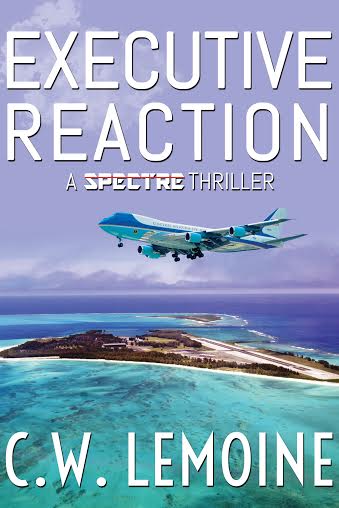 C.W. Lemoine’s globetrotting Spectre series has seen the action shift from the deserts of Iraq and Syria to the homeland. This fourth entry shifts much of the action to the Asia Pacific region. As the book opens, we find Cal “Spectre” Martin on a plane to Taiwan. Cleared of the false charges that plagued him, he’s enjoying a romance with FBI special agent Michelle Decker, and is set to meet the President of the United States aboard Air Force One.

But it’s not all sunshine and puppies. The president launches into a speech supporting recognition for Taiwan as a sovereign nation with its own member status within the United Nations (for those who don’t follow Asian politics, such a move would be a huge affront to China). Before he can finish, multiple terror attacks roll in at United States bases across the Pacific. In one such attack, an electromagnetic pulse suitcase bomb detonated at an air force base in Guam. The effect? Disabling all unshielded electronics and power grids within its path.

Could a world war sparked by China and the U.S. be next? The ensuing chapters is a highly believable game of global chess in which Spectre has never been more influential, and Lemoine’s pacing is just about perfect. Fans of air combat history will appreciate Lemoine’s inclusion of Midway Island – which proved strategically vital in World War II – as a geographic flash point.

As a whole, the series has matured considerably, with the threat Spectre has chased throughout reaching into the executive branch of government. Although Lemoine delivers a dose of backstory for the uninitiated, readers are highly advised to start at the series’ beginning and work their way up.