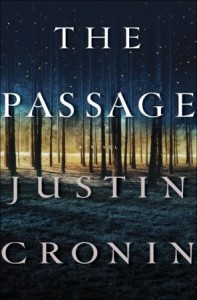 The Passage by Justin Cronin

Earlier in the year, we called Justin Cronin the ultimate literary outlier. Cronin, the winner of the Pen/Faulkner award for a book that his Iowa Writer’s Workshop cronies must have admired, went off and wrote himself a gory-ass vampire novel. For those of you unfamiliar with the Iowa Writer’s Workshop, it ‘s far more prestigious than its name implies. Somehow, the most storied graduate writing program in the country established itself in this small Midwestern university town decades ago, producing many of America’s finest writers. None of them have become or seemed to want to become genre fiction writers. Suffice to say that Cronin is way outside the mold of the typical vampire novelist, who is overwhelmingly female, Christian and romantically-inclined in her literary pursuits.

The Passage is a huge book, easily the thickest on our bookshelf in the past three years.  Not that the sheer girth will slow you down, because once you get past the first 50 pages or so – Cronin can’t help himself from referencing Harper Lee’s To Kill a Mockingbird on the first page – the plot is one incredibly envisioned rampage after another. In fact, the book’s highly characterized first pages set you up for the first significant thing you learn about the book, which is that he isn’t afraid to kill prominent characters suddenly and without warning. Just when you think you have identified the book’s protagonist, Cronin takes them up to the great character trove in the sky.

In The Passage, vampires are called “Virals,” “Smokes” and other colloquialisms as they move through the decades and centuries. The book handles time periods gracefully through a variety of found artifacts, including government reports, recordings and videos.  It’s strangely gratifying to read about future Americans picking through the remains of our time period, devouring MREs and cannibalizing hundred-year-old automobiles for parts. It would be giving too much away to reveal the common thread between the book’s various timelines, but it’s with ease that we can dub the book’s final third its best. The plot never runs out of steam. It just keeps running, and even after all that reading, I found myself hoping and praying that Cronin is plotting out the sequel.

Look for The Passage to crack our upcoming list of the best all time vampire thrillers.