The Bottom Line: Mysterious, sexy and laugh-out-loud funny. Among female sleuths, Kate McCall is near the top.

Is it even possible to be too beautiful, seductive and rich? That’s what New York private detective Kate McCall thinks of her newest client, Brooke Barrington, who is suffering from a case of identity theft. With a net worth of four billion dollars and cover girl looks, it’s easy to see why her identity is a hot commodity. 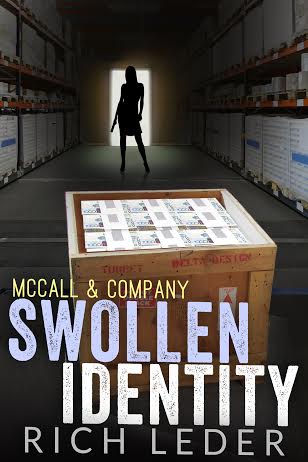 And here’s the twist: Brooke Barrington has an identical twin sister. Kate’s reaction when she finds out: “Sorry, I just put my pepper-sprayed friend in a cab, and this margarita has enough tequila to kill a bear. Did you just say you had a twin sister named Bailey?”

The second installment in Rich Leder’s McCall & Company series finds Kate settling into the Private Investigation firm she inherited from her father, whose murder is yet unsolved. Fortunately, she hasn’t abandoned her career as a way-off-Broadway actress. She once again uses her considerable acting chops to go in disguise during the course of her investigations, as well as the unconventional tactics of her melodramatic acting troupe, the Schmidt and Parker Players.

Leder’s masterfully balanced plot has Kate pursuing both cases while also engaged in two highly entertaining romances. Just after writing a retainer check, Brooke – or was it Bailey? – stuns Kate by laying a seriously hot kiss on her. Kate doesn’t think of herself as a “girl-on-girl” kind of girl, but the attraction is undeniable. Meanwhile, she develops a mutual attraction with commercial-real-estate-broker Peter Mills. In another delicious twist, Kate and Peter fall for each other while Kate is in disguise. These explorations into her sexuality are filled with comedy, but they also serve as an effective character arc for Kate that series fans will appreciate.

Is Kate’s client really Brooke Barrington? Will she edge closer to solving her father’s murder? Which side of the team is Kate playing for, anyhow? We highly recommend that you read Swollen Identity to find out.

Book Review: Tell Me A Secret, a Psychological Thriller by Ann Girdharry
The God’s Eye View, a new Spy Thriller by Barry Eisler