The Bottom Line: An exotic, utterly captivating heist novel featuring one of the genre’s most entertaining detectives. 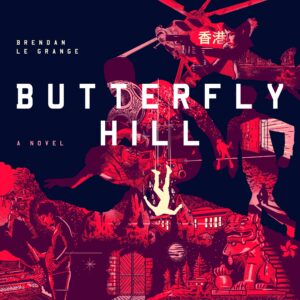 Butterfly Hill opens as fugitive stowaway Hiko Shimizu escapes the lower deck of a rusting fireboat, only to swim through toxic Hong Kong waters to find his father, a legendary bank robber. To say Hiko’s family is dysfunctional would be a vast understatement. Hiko may have plotted to kill his mother, but he holds no love for his father, either, who walked out on them when he was just four-years-old. Nevertheless, he’s determined to enlist his father’s help in the theft of a massive rare diamond. Adding to the intrigue, Hiko seeks to decode a map to the lost Imperial Seal of a 700-year-old dynasty.

Enter Europol detective Matthys Rossouw, who is hot on the trail. Complete with crushing insecurity, a penchant for fake luxury watches and an insatiable appetite, Matthys is easily one of the most entertaining detectives to come along in years. A keen observer of human behavior and talented investigator in his own right, Matthys envies his partner, the impeccably dressed and highly professional Hong Kong Police Chief Inspector Gu (one of many gems: “If Matthys wasn’t fired, he would strive to be more like Gu. And he’d wear more suits”). The interplay between the two detectives works as well as the relationship between Agatha Christie’s Poirot and Detective Chief Inspector James Japp, although it is, in some ways, even more subtle.

Like any good heist novel, le Grange’s novel is built upon intricately woven layers of greed, treachery and distrust. But the twisted bonds of family set the story apart from those that came before it, adding depth and dark comedy that never misses a beat.

In the audiobook version, South African narrator Adrian Galley’s steely baritone is perfectly suited to Hong Kong, a city with a multitude of global influences. Meanwhile, the multicultural cast are given believable, discrete voices. Galley’s pacing is deliberate enough to allow readers to fully digest le Grange’s clever wordplay and the crackling dialogue between characters. Logging in at just over eight hours, the book can easily be enjoyed over the course of a couple of long flights.

Although Butterfly Hill serves as a functional entry point to the series, references to events in the series’ first book, Drachen, are plentiful, and readers should start from the beginning to fully appreciate the character arc.

Fire & Blood: 300 Years Before A Game of Thrones, by George R.R. Martin
Death by the River, an Addictive Teen Thriller by Alexandrea Weis and Lucas Astor