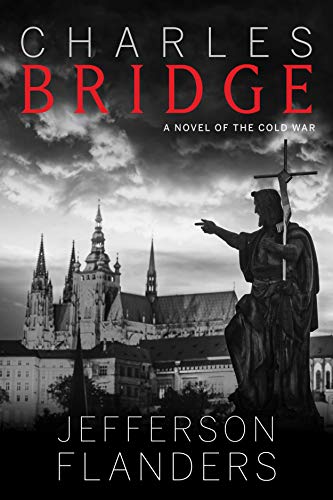 Jefferson Flanders’ gripping new novel begins in 1980s New York City as antique dealer Claire Markham is hired to go to London to bid on an 18th century clock. But after returning, her client Benjamin Singer asks her to take on a more daring assignment. Claire is asked to go to Prague, but this time, the antiques trade is only the pretense for her trip.

Claire is to be a courier for a Russian woman who wishes to defect from the Soviet Union. Or at least that’s what she is led to believe. Soon, she learns that she must be a body double for the defector. The operation is purportedly orchestrated by the New Exodus Project, a group that claims to help Russian Jews emigrate to Israel.

Soon, her life as a simple antiques dealer seems far away as she is hunted by the KGB, the Czechoslovak secret police and others.

Like author Jefferson Flanders’ previous Cold War novel An Interlude in Berlin, Charles Bridge – named for the historic river crossing in Prague that serves as a rendezvous point – is a tautly-woven snapshot of the decades-long spy battle between the Soviet union and the west. Claire Markham’s seduction into the world of espionage is both believable and sweat-inducing as her employers prey on her passions and weaknesses.

As she heads deeper into a world from which there may be no escape, Flanders’ depiction of the broader struggle over nuclear proliferation is fascinating. The book’s seemingly small moments, such as when Claire finds refuge with the son of a diplomat, only to be told that she can’t stay because one of the building’s tenants is spying on him, add up to a highly believable tale of high-stakes chess where danger lurks around every corner. Highly recommended.