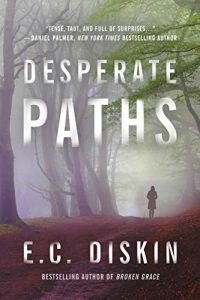 Within a week of returning to her hometown to care for her father, struggling actress Brooklyn Anderson finds herself at the epicenter of two brutal crimes.

Just hours before her arrival, an unknown assailant shoots A-list actor and Eden native Darius Woods, who’d written a screenplay that would purportedly expose carefully kept community secrets. Longtime local lawman Sheriff Wilson must investigate even as the evidence implicates people close to him. By week’s end, he’ll find Brooklyn wiping prints off a gun while her father lays dead next to her at the bloody crime scene.

It doesn’t look great for Brooklyn. But author E.C. Diskin has populated Desperate Paths with a number of first-rate suspects, including Sherriff Wilson’s son, Eddie, a former classmate of Darius woods who has been undergoing treatment for depression and addiction. Then there’s Brooklyn’s older sister, Ginny, who has a secret past with Darius, and as a young girl, famously won a shooting contest with her father’s gun. Finally, there’s the handsome but creepy Pastor Gary, who crusades against abortion doctors while secretly hitting on teenage girls.

Told over the course of a single week, Diskin uses a non-linear narrative that alternates between the seventh day and those that came before it. The structure itself creates a great deal of tension, as does the simmering question at the heart of the investigation – who or what is in Darius’ screenplay? Diskin, author of the excellent Depth of Lies, has crafted another winner that uses social conventions to great effect.