The Bottom Line: Atmospheric and engrossing, Damned is a perfect read for fans of gothic paranormal fiction. 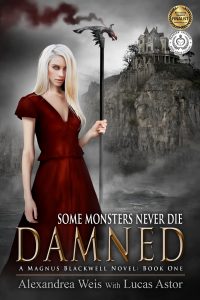 The first entry in the Magnus Blackwell series takes place on an island off the coast of Maine, more than a century after the series prequel. Architect Will Bennett has purchased Altmover Manor as a surprise for his fiancée, Lexie. After getting over the initial shock regarding the manor’s dilapidated condition, Lexie agrees to co-helm its restoration. She then learns what Will and everyone else in Maine already seems to know: the manor is famously haunted.

Authors Alexandrea Weis and Lucas Astor have drawn Altmover Manor with such eerie depth that the property is practically a character unto itself. Altmover is the former home of Magnus and Katherine Blackwell, who, as legend has it, were murdered.

From the get-go, it’s clear that this fixer-upper-from hell — complete with a voodoo doll in the attic — is going to put strain on Will and Lexie’s budding romance. But once Lexie starts communicating with Blackwell’s ghost, it’s evident that much more will soon hang in the balance. For long-dead purveyor of magic, Blackwell is surprisingly charismatic, thoughtful, melancholy and even sweet. For a paranormal criminal, he’s also surprisingly sympathetic.

As the plot inevitably makes its way from Maine to New Orleans, Lexie is drawn to a world of spirits, voodoo and depravity, putting everyone she cares about in danger. Once down south, the plot bursts with flavor and steadily escalating stakes, and the deepening relationship between Blackwell and Lexie is full of surprises.