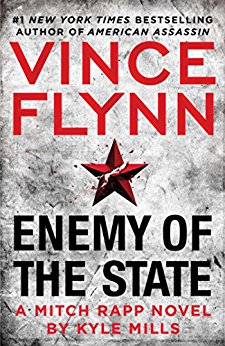 Vince Flynn, Tom Clancy and Robert Ludlum have more than a genre in common; the books that roll off the production line bearing their names are no longer written by them, as these great authors are all, sadly, long dead. It’s easy to see why publishing houses continue to market these books as such: greed. But given how well stand-ins like Kyle Mills do writing the Mitch Rapp books, the whole exercise seems silly. Isn’t it time to start putting his name in the marquee spot? Or better yet, the name of Flynn’s longtime hero, Mitch Rapp? The way things stand now, it’s starting to feel like the Facebook page of a long-dead friend whose family continues to publish new material in their name. A little creepy.

With that said, Enemy of the State is one of the best Mitch Rapp books in recent memory.  Here’s the plot:

After 9/11, the United States made one of the most secretive and dangerous deals in its history. The evidence against the powerful Saudis who coordinated the attack would be buried. In return, King Faisal would promise to keep the oil flowing and deal with the conspirators in his midst.

When the king’s own nephew is discovered funding ISIS, the president suspects that the Saudis never intended to live up to their agreement. He decides that the royalty needs to be sent a message and that Mitch Rapp is just the man to deliver it. The catch? America can’t be seen moving against an ally. Rapp will be on his own. Forced to make a decision that will change his life forever, Rapp quits the CIA and assembles a group of independent contractors to help him complete the mission.

They’ve barely begun unraveling the connections between the Saudi government and ISIS when the brilliant new head of the intelligence directorate discovers their efforts. With Rapp getting too close, he threatens to go public with the details of the post-9/11 agreement between the two countries.

Facing an international incident that could end his political career, the President orders America’s intelligence agencies to join the Saudis’ effort to hunt the former CIA man down.

Rapp, supported only by a team of mercenaries with dubious allegiances, finds himself at the center of the most elaborate manhunt in history. It’s only a matter of time before he’s caught or killed. Will it be enough to turn the tables on the Saudis and clear his name?

You already know the answer to that question. Still, the journey is well worth taking. Read it.

Grave Misunderstanding, a Hilarious Whodunit by Len Boswell
I am Watching You, an Engrossing Crime Thriller by Teresa Driscoll