The Bottom Line: A truly hilarious mystery in the tradition of Janet Evanovich, Thomas Davidson and Rich Leder. 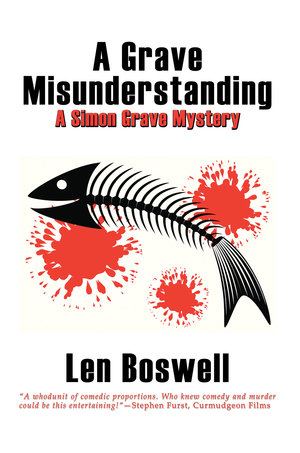 In Len Boswell’s Grave Misunderstanding, small town Crab Cove is the focal point of a clever satire on the murder mystery genre. For a small town, Crab Cove has seen far more than its fair share of crime. Approximately eight-seven of the town’s many unsolved murders are attributed to one person – Chester Clink, aka the Dockside Ripper, who is still at large. And yet when second-generation Detective Simon Grave arrives at a local mansion, he finds a scene unlike any he has ever witnessed: the prime suspects are in a locked room, while the murder victim – with a severed hand, no less – is sprawled on an impossibly high staircase.

While the plot of Boswell’s hilarious whodunit is reminiscent of the film Clue in both tone and style, it’s also a genuine brainteaser that readers will enjoy trying to solve alongside Detective Grave and his hapless partner Sergeant Barry Blunt. Plot aside, much of the book’s fun is found in Boswell’s characters, a cast that mines decades of of literature for inspiration. There’s pesky reporter Claire Fairly, “orange as an orange in her TV makeup,” governess Lola LaFarge, whose head reminded the detective of “some planet-killing asteroid,” and Smithers, a robot that “looked every inch a real man, albeit a man burdened with the duties of a butler.”

Overall, Grave Misunderstanding is a throwback to a kinder, gentler kind of comedy that was popular for much of the 20th century until being derided as “campy” in recent years. But given today’s polarizing cultural atmosphere, Boswell’s novel feels completely fresh. Readers will do themselves a favor by tuning out today’s mean-spirited, politicized comedy for a few hours and spending time with this light-hearted romp. The laughs – and the intrigue – are guaranteed.