The Bottom Line: A seductive, action-packed thriller that has a stiletto-clad foot on the gas for the entire ride. 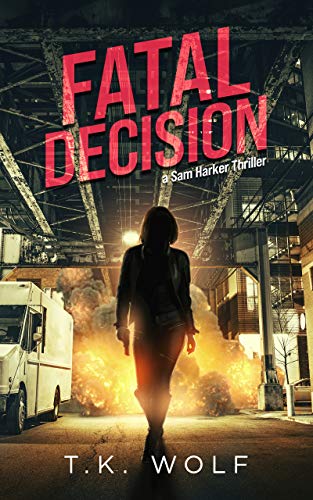 In T.K. Wolf’s debut novel, a career assassin gets recruited for one last job with the shadow organization she had escaped.

After finally slipping free from Delphi, the multinational shadow organization that molded Harker into a highly skilled, one-woman killing machine as a young woman, Sam Harker has turned vigilante and set her sights on disrupting Delphi’s international network of unsavory informants.

But her methods have proved far too effective and disruptive for the organization. Soon they force her into a final job that threatens the one real connection she has made since being orphaned at 16 and eventually recruited by Delphi. Harker is forced to tap into her dark past and unconventional profession to save the man she loves.

In Harker, Wolf has crafted a female assassin that Robert Ludlum fans can heartily embrace, complete with a familiar recruitment origin story. But unlike Jason Bourne, Harker has a full arsenal of deadly feminine wiles in her kill bag and she’s not afraid to use them — whether that means infiltrating a notorious drug cartel or slowly and methodically prying out information from human traffickers.

Wolf’s pacing is just right, delivering actions and insights in potent doses, with just enough backstory and character development to give the novel sufficient heft. And thanks to sharp prose, Wolf takes us from Mexico City to Manhattan with a rapid-fire delivery that achieves pandemic-era pleasure.