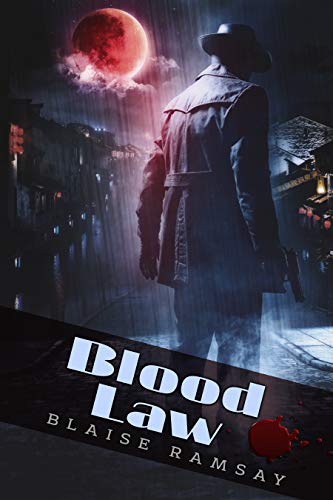 Bloodlaw opens as assistant district attorney Alastair Maddox awakens in the woods near Lake Michigan. It’s the 1920s, and prohibition is the law of the land. Fearing he may have been buried alive, Alastair finds himself covered in maggots and dirt. A strange voice from an unseen being urges him on. He walks through the rain to a farmhouse, where the couple in residence briefly wonder if he might be a bootlegger. Nevertheless, they have mercy on the naked stranger and take him in. He immediately repays them by drinking blood from their livestock.

Once he makes his way back to Chicago, he finds a newspaper headline that seems even more improbable than the night before. He’s been missing for a month, and someone has already taken credit for his murder. Author Blaise Ramsay follows her dazzling opener by turning the clock back two months to detail the events leading up to it. If you think the 2020s era Chicago is tumultuous, just wait until you get Ramsay’s take on the city 100 years prior. Gang warfare claims countless victims, including Alastair’s own parents and grandparents.

What elevates Bloodlaw over the countless vampire books that have come before it is Alastair’s relationship with two women: suspected murderer Alexandra DeLane, and Charlaine Ware, whom he calls Charlie. Without becoming explicitly sexual, Bloodlaw serves up plenty of searing moments that will get readers’ hearts pounding.

In terms of the book’s place in the canon of vampire romance literature, Bloodlaw feels like a graduation of sorts from Stephanie Meyers’ Twilight series to more mature fare. At the same time, fans of Anne Rice’s classic Lestat series – with its keen eye on historical accuracy and lush atmosphere – will feel right at home. Let’s hope another Alastair Maddox book comes shortly.