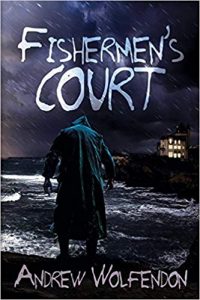 By his own admission, 38-year-old Finnian Carroll doesn’t have much to live for. He still lives at home, though his parents are long dead. He survived suicide and is depressed enough to give it another try. Until three intruders try to murder him and stage his death as a suicide.

Fortunately for Finnian, his attackers are hopelessly inept. They write a suicide note on his computer, then force him to drink vodka and swallow Xanax and Valium. The half-baked plan might have worked, except they don’t bother to wait until he’s dead before leaving, and are too dim to see that Finnian is playing possum.

In a clever twist crafted by gifted debut novelist Andy Wolfendon, the assault appears to be just what Finnian needs. He is filled with a desire to live, reunite with ex-girlfriend Jeanie, and seems to relish taking the criminal investigation into his own hands. Together with his best friend Miles, he unpacks the motive for the attack. There had been no prior threats or demands for ransom. Three people just wanted him dead. But why?

Despite Wolfendon’s lighthearted tone and clever dialogue, Fishermen’s Court still manages to include plenty of suspenseful moments. Beneath the comic crime plot is a thoughtful novel with plenty to say about revenge, atonement and second chances.

Fallout, a Must-Read Spy Thriller by William Hunter
Black Frog, a Small-Town Crime Thriller that Fires on All Cylinders