The Bottom Line: A must-read for spy thriller and political thriller fans. 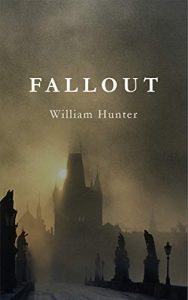 Given the growing distrust between the U.S. and Russia in the real world, it was only a matter of time before the rebirth of the espionage thriller. William Hunter’s Fallout isn’t the first in the new wave of Russian spy thrillers, but it’s among the very best, notably because of how deftly Hunter connects the cold war era with the present.

Banastre Montjoy, deputy chief of MI6, is in the U.S. for both business and pleasure. After canceling a charter flight due to a scheduling conflict, a New York businessman, presumably, the person who took his place on the flight, is gunned down on American soil. Meanwhile, three former M16 colleagues – all of whom were attached to a failed mission in 1984 – have recently gone dead or missing.

Enter FSB official Markus Heinrich. Born with the surname Arkipov, and having gone by the deep cover codename Spindle during the cold war, he is currently known as Chénard. The Parisian expat and Montreal resident has quietly begun eliminating his former adversaries. But why now?

The answer to that question is a journey well worth taking. As spies go, Hunter’s Montjoy is a true chess master, an aging strategist whose days of adrenaline-fueled operations were thought to have been far behind him. In fact, most of Hunter’s characters are either in retirement or rapidly approaching it. But as the story takes Montjoy from country to country in search of answers, Hunter uses age as both an advantage and vulnerability in convincing fashion, ratcheting up the tension with each succeeding passage.

Like Hunter’s excellent first novel, Sanction, Fallout is hardly a bone-rattling romp. And yet it remains breathtaking thanks to the intellectual battle between two titans of intelligence, building to a satisfying crescendo during the book’s closing chapters. For fans of political thrillers and espionage fiction, this is a must-read.