The Bottom Line: Don’t miss this white-knuckled thriller from the dark princess of suspense. 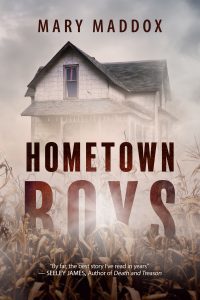 After the grisly murder of her aunt and uncle, 40-year-old Kelly Durrell returns to her hometown in rural Illinois. Soon, her grief is compounded by another shock – local authorities have arrested Kelly’s ex-boyfriend, a local junkie named Troy, and accepted his confession. His stated motive? Revenge. Kelly broke his heart two decades earlier.

Most everyone in Morrison seems happy to lay the blame on Kelly, but she’s not buying it. If he wanted to hurt her, why not kill her parents, who still live in town? There must be some other explanation.

Author Mary Maddox, the author of 2016 best thrillers of the year pick Darkroom, returns with her second Kelly Durrell book. Still haunted by the murder of her friend Day Randall, Maddox has given Kelly two key allies: Troy’s attorney, who believes someone forced him to commit the murders, and Cash, her boyfriend back in Boulder, who happens to be a detective. But getting to the truth won’t be easy. Maddox has woven a complex web of secrets in tiny Morrison held by a cast of colorful locals. There’s Gene Countrymen, who has become an influential entrepreneur, creepy thugs Nails and Big Marla, and sleazy businessman Charles Lindgren, who walks free despite being suspected of three past murders. Among perfectly drawn locations like the Moose Lodge, complete with women in slinky cocktail dresses and too-strong perfume, no one seems entirely innocent, and no one is safe, least of all Kelly.

Riding shotgun with Kelly as she attempts to solve the murders is exhilarating, even as she navigates between the material world and evidence on Facebook, which is so central to the investigation that it seems like a character in its own right. While Kelly is still very much an amateur sleuth, she’s considerably more hardened this time out, but no less vulnerable. Her world is colored by Maddox’s darkly cinematic prose, making even the most mundane actions somehow terrifying (“Greg saws his slab of prime rib, his knife scraping the plate with each angry stroke”). Overall, this second series entry is every bit as inspired as the first. Move Hometown Boys straight to the top of your reading queue.