The Bottom Line: An ebullient historical thriller that solves one of World War II’s most perplexing mysteries in highly entertaining fashion. Perfect for readers waiting for the next Indiana Jones novel. 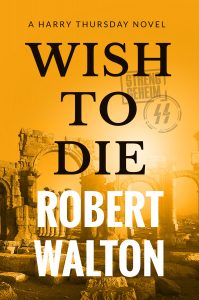 In Robert Walton’s third Harry Thursday series novel, the intrepid archeologist attempts to right a wrong perpetrated by the Nazis during World War II: the theft of the legendary Russian Amber Room and a hoard of historically significant diamonds from a palace near Leningrad.

The novel begins in 1945, as the Amber Room – then considered an eighth wonder of the world – is disassembled, packed into 47 crates, and put in a truck en route to its eventual destination in Germany. The commander in charge, SS-Hauptsturmführer Theodore Möller, sees that the inventory was loaded onto the train, but he is far from what he seems. Möller is actually a spy whose real name is Ted Thursday, and he has a plan to divert the shipment to Greece, where he also intends to rendezvous with his secret lover, Tatiana, a Ukrainian art expert.

But something goes terribly wrong. After the war, the jewels are seemingly lost forever.

Decades later, Ted’s nephew, Harry Thursday, is in Greece when he happens upon an art historian named Elina Kulinov – who, unbeknownst to him, is Tatiana’s daughter – and saves her from certain death. Elina is on a mission to recover the aforementioned jewels. While Harry is oblivious to Elina’s identity and his uncle’s past role, one thing is immediately obvious: someone is willing to kill her to stop the jewels from being discovered.

In Wish to Die, Walton has done what the very best historical thrillers do – take an unsolved mystery (the whereabouts of the original real-world Amber Room remains unknown) and bring a plausible explanation to life through fiction. As the narrative jumps between countries, eras and characters, Walton’s trademark prose is as cinematic as ever. Throughout, the tone is light, the humor wry, and the characters likable. While Harry hardly an Indiana Jones clone, there’s enough connective tissue that James Rollins fans will take to him right away.

While the narrative hinges on a great deal of coincidence, requiring more suspension of disbelief than usual, Walton’s meticulous historical research grounds the entire story with a solid foundation. Haven’t read Walton’s first two series novels? Fear not. Wish to Die is a perfect entry point to the series.