Bottom Line: One of the year’s best thrillers. Exhilarating and original, HYBRID demonstrates that even wildlife conservation can have a sinister underbelly. 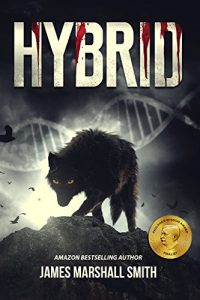 Dieter Harmon seems to be nothing more than an unassuming veterinarian. He’s also the new guy in town. Not long after stumbling upon a mutilated body in the woods, just the latest in a string of animal attacks, he finds himself at a moral crossroads.

It seems that the government is trying to restore the wolf population inside Yellowstone. But after Dieter meets the conservation group – including a including a pair of ne’er-do-well rangers in their own power struggle — he also realizes that something’s not quite right about the wolves roaming outside the Grand Loop. Things soon get hairy as Dieter discovers that he has become prey.

Author James Marshall Smith’s follow up to SILENT SOURCE, one of our picks for the Best Thrillers of 2016, has created anything but a standard whodunit in HYBRID. Smith paints a lurid story involving personal vendettas and underground experimentation. At times, it read like a wondrous mash-up between Mary Shelly and James Patterson.

It’s not a slow burn. Cerebral, complex and yet heart-pounding, the book teeters at a full boil throughout. A finalist for the 2017 William Faulkner-Wisdom Novel Award, HYBRID is a must-read.