The Bottom Line: A series-worthy supernatural thriller about a gifted telepath who finds himself over his head in murder and mayhem. 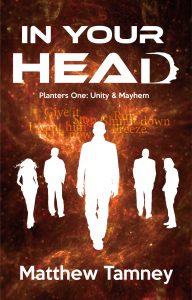 Expat Pete Erickson had left the U.S. for Taiwan to escape the labels he had grown up with: loner, sociopath, narcissist. But only a select few know that Peter, in fact, has a superpower: the ability to plant ideas in unsuspecting stranger’s heads (think “jedi mind trick,” and you’ve got the right idea). But having a superpower isn’t all wine and roses, as Peter’s attempts to control human behavior occasionally backfire. That’s just one of many reasons why life in Taiwan is so good for him. Since he’s still learning the language, he’s less inclined to rely on his powers to get what he wants.

But Pete’s life is disrupted when longtime friend Alex, also a powerful telepath, arrives unexpectedly in Taipei. Peter soon learns that Alex was sent to fetch him by “Teach,” their longtime mentor. Soon after the pair arrive in New York, they learn that Teach wants their help influencing the CEO of a biotech company. The job seems innocent enough, but Pete soon discovers that he’s gotten himself into something far more dangerous than he had ever imagined.

Playing on the classic theme of mutant empowerment, Matthew Tamney’s debut novel follows in the footsteps of many classic sci-fi stories, notably The X-Men. But Tamney distinguishes himself by flipping the script on the classic mentor/apprentice relationship. Pete is undoubtedly far more content as a “foreigner” in Taipei than he is in the collective where Teach and his gifted students truly understand him. In particular, scenes with budding love interest Ming Ru are brilliant. After unsuccessful attempts to plant several notions in Ming Ru’s head, Alex dismisses her as “a stone.” Pete, on the other hand, sees her as someone he can be himself with.

Overall, In Your Head is a thoughtful sci-fi novel that could easily be shaped into a satisfying series. Readers looking for a fully developed hero will relish Pete’s carefully drawn character arc. But the conspiracy that fuels the book’s primary tension takes several chapters to unfold, so those looking for end-to-end action should look elsewhere.

Cut-Throat Syndrome, a Hard-Hitting Action Thriller by Michael Allan Scott
The Man on the Porch