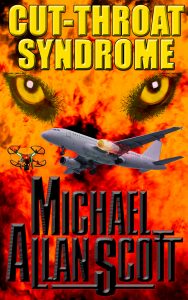 When Phoenix Detective Frank Salmon receives an early morning e-mail from psychic Lance Underphal, he knows even before he reads the one-word subject line – “body” – that he had better pay close attention. The star of author Michael Allan Scott’s eponymously named Lance Underphal Series has a reputation for miraculous visions that put criminals behind bars. Thanks to the tip, Frank soon finds the body of a mutilated teenager.

Across the city, Jake Jacobs, from a foundation called Reach Out for Children, arrives at the home of a distraught mother whose 17-year-old son has gone missing. Meanwhile in São Paulo, a ChinaAir flight explodes during takeoff. How do these storylines tie together? Readers seeking the answer to that question will find themselves rewarded with a huge payoff.

Throughout this engrossing thriller, Scott juggles an ensemble cast with ease, cutting between characters and storylines in cinematic fashion. While Frank and Jake drive most of the action, Lance’s gut-wrenching visions provide the driving force behind the plot. Scott wisely writes Underphal’s scenes in the first-person, creating unforgettable, moving passages that feel downright mystical in comparison to the hard-hitting action found elsewhere. Underphal’s canine companion, Chopper, his tortured memory of his deceased wife, and his striking appreciation of the desert landscape add up to an oddly alluring character.

Cut-Throat Syndrome is a perfect entry point to the series, featuring a compelling storyline, deftly written action scenes and real emotional heft. In nearly all ways, it’s a highly entertaining conspiracy thriller. But the real reason you’ll reach for Scott’s other books? To spend more time with Lance Underphal and his singular take on the world.

The Bishop Burned the Lady, a Stellar Murder Mystery by Bill Percy
In Your Head, a Series-Worthy Supernatural Thriller by Matthew Tamney