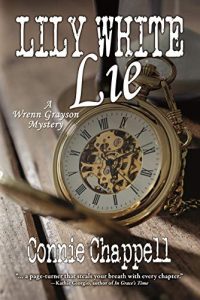 The latest entry in the Connie Chappell’s Wrenn Grayson series begins with a family investigation. The twenty-nine-year-old historian is spending Thanksgiving week alone at their rural farmhouse when an uninvited visitor arrives. Bret Kilmore, an old college friend of Wrenn’s boyfriend of seven years, Gideon Junior, claims to have a message from Gideon’s long-lost father.

Bret soon reveals himself as the worst type of guest. He invites himself to stay, comes on to Wrenn, jabs at the age difference between her and Gideon, threatens her reputation, and questions her integrity. While a lot of people would find Bret’s behavior downright menacing and run for the hills, the unflappable Wrenn permits Bret to stay on the pretense of obtaining information about Gideon’s father’s whereabouts.

What follows is a puzzle featuring stolen Easter lilies, church flower distribution, spycraft and one seriously complicated flirtation. There are plenty of enjoyable light moments in the narrative, such as wordplay on Gideon’s monogram (GOD) and Stonehenge. However, as Wrenn slips into sleuth mode, the tension delivered by Bret’s arrival in the Grayson home quickly slips away. Some fans will have a hard time believing that someone of Wrenn’s intelligence would put up with Gideon’s insufferable college buddy. But for most cozy mystery fans, the well-crafted investigation at the core of the book will be more than enough to keep them invested in the series.

The Neuromorphs, a Visionary Sci-Fi Thriller by Dennis Meredith
The Reckoning, a New Legal Thriller by John Grisham