The Bottom Line: Visionary, wildly entertaining sci-fi that echoes our current societal challenges while showcasing technology that is only slightly out of reach. 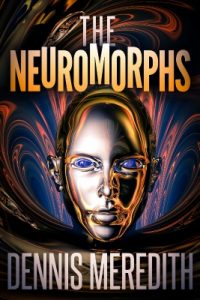 In 2050, the combination of advanced robotics and artificial intelligence has resulted in breathtaking societal benefits. Helper Robots that look and feel much like humans are ideal servants, sexual playthings and at times, even lifesavers. But like any true AI, Helper engineers don’t completely understand how they function.

What could possibly go wrong? If you think Russian hackers have made a mess of American politics, wait until you see what they do to the robots of the future.

Meredith, author of 2017’s extraordinary medical thriller The Happy Chip, has created the ultimate crime-solving couple in retired SEAL Patrick Jensen and his wife Leah, a Harvard-educated attorney. When we first meet Leah, she’s lounging by a pool in a bikini, using a pair of VR goggles to review legal cases, while a Helper tidies up around her. This utopian work environment won’t last long, however. A new, more sophisticated class of robot – a neuromorph – walks among them. Luckily for Leah, her husband knows his way around a gun.

The threat of rogue AI, especially in humanoid form, is practically its own genre of science fiction. But unlike the over-the-top fantasy sci-fi horror epic Westworld, the wonders of Meredith’s Neuromorphs, as well as its terrors, seems close at hand. After all, brothels featuring sex robots are already on offer, and the truly intelligent, highly amusing models Meredith has created seem utterly attainable. But to Meredith’s credit, they are also incredibly frightening. Like bees, the neuromorphs have the ability to create a “hive” mentality. And, as a programmer muses to Patrick and Leah, “They’re immortal. They won’t age, just replace parts that wear out. Even their brains.” That puts the human species on the brink of extinction.

Writing about the highest possible stakes, Meredith’s latest outing is all heart. Every line of dialogue and action-filled passage feels authentic. In a novel where humans are at times indistinguishable from the new master race, precision counts. Neuromorphs is a superb read, and is absolutely essential fiction for anyone interested in the threat AI poses.