The Bottom Line: While delivering nonstop suspense and intrigue, Missions is a thinking person’s terrorism thriller that fans of Terry Hayes and Alex Berenson will adore. 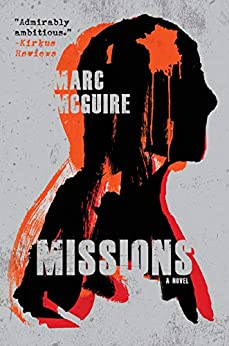 Told in a non-linear timeline, Missions delivers plenty of suspense along with an intellectual approach to the war on terror. Among the canon of great terrorism thrillers set in the post-911 decade, Missions focuses on the people and brainpower behind the investigations rather than muscle-bound heroics. That’s not to say that the book contains no action or military scenes, as it certainly does. But author Marc McGuire’s focus on the complex people and issues behind the war on terror distinguish the book from its predecessors.

As we ride along with O’Gara as he visits the CIA for the first time, we understand that for someone with such a talented mind, he’s still young enough to be awestruck (he paces around the perimeter of the CIA seal, a huge granite disc in the lobby floor, and asks how much it weighs). Later, we see O’Gara’s trying to convince a colleague to understand the Palestinian point of view (“How else are they going to convince the Israelis to end the occupation?”) in one moment, and in the next, marvel at how another colleague had time to get a new haircut. Jihadists are similarly well-drawn. When terrorist Mohammed Jamal meets a contact who can help him recruit suicide bombers, he’s greeted with the line, “Are you the monsieur who wishes to buy some dogs?” and immediately chastises it as “a silly code” that he finds amusing.

Such scenes inject a great deal of humanity into what are often black-and-white characters, and substantially raises the stakes when they’re put in danger.