The Bottom Line: While short on mystery, Neon Prey nevertheless delivers an edge-of-your-seat manhunt for a serial killer that should be compelling enough for most fans. 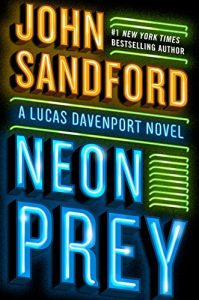 Now, seven months after a job that went south and landed him in jail, Deese has skipped out on bail, and the U.S. Marshals come looking for him. They don’t much care about a low-level guy – it’s his boss they want – but Deese might be their best chance to bring down the whole operation. Then, they step onto a dirt trail behind Deese’s rural Louisiana cabin and find a jungle full of graves.

As Sandford novels go, there aren’t a lot of surprises in Neon Prey. Nevertheless, Sanford delivers the goods with a persistence hunt for the ages. Fortunately, Lucas Davenport is such a unique character amidst the crowded literary landscape that he could be put into a romance novel and it would still be interesting.

The Tale Teller, a Gripping Crime Thriller by Anne Hillerman
The Madhouse, One of the Year’s Best Thrillers, by Lawrence Matrick M.D.