The Bottom Line: A gritty tour-de-force medical thriller that showcases both the wonders and horror of 20th-century medicine. One of the year’s best thrillers. 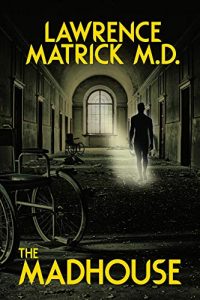 The Madhouse is the story of New Orleans native Alex Gage, who struggles out of poverty to become not only a respected psychiatrist, but also an aspiring reformist. The story begins in the deep south as Alex is born with a clubfoot that keeps him from being drafted (it would be surgically repaired later in life). Despite his ascension to higher learning, he finds himself working as a physician in a Canadian mental institution – a nightmarish shop of horrors that would make Dante reconsider his definition of hell.

Alex’s colleague, Dr. Aaron Levy, a former Italian mafia thug, spends his time sexually assaulting the nurses, plying them with cocaine and morphine, abusing his patients, and talking about himself in the third person (“Aaron is poorly prepared.”)

Alex’s life takes a turn for the worse when he stupidly confides in Aaron, telling him about a deadly encounter with a man his mother knew back home. Shortly afterwards, Aaron begins blackmailing him, repeatedly requesting that he break the law in exchange for his silence. It’s a brilliant twist that instantly raises the book’s already sky-high stakes.

Alex’s girlfriend, Monique, organizes the women to march and force the early changes to the primitive abortion laws in the country. The nuns, the female ward supervisors, Rani, an East Indian female doctor, and the female nurses endeavor to help Alex change the oppressive attitudes towards the institutionalized orphaned children, the aboriginals, the mentally deficient and intellectually deprived patients. Working together, will they be able to change the course of treatment as to prefrontal lobotomies, and to abolish illegal female sterilization?

Author Lawrence Matrick, M.D. has drawn an extremely evocative world where danger lurks around every corner, especially where medicine is practiced. But The Madhouse is more than just a gritty crime thriller. Matrick, himself a former psychiatrist with experience as a mental hospital resident, employs the medical practices of 20th-century psychiatry to terrifying effect. Note that The Madhouse is not for the faint of heart. The book is chock full of bone-chilling afflictions and remedies, ranging from venereal disease to lobotomies and shock therapy, and Matrick includes them without ever seeming gratuitous. As an added bonus, Matrick has added an epilogue detailing a brief history of the evolution of mental institutions.