The Bottom Line: For hardcore James Patterson fans only. 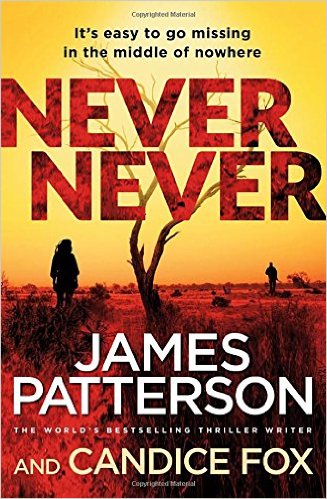 Never Never won’t be the worst crime novel you’ll ever read, but in terms of execution, it may be the worst yet from the James Patterson book factory (for those not in the know, a team of writers are responsible for churning out “James Patterson” books – in this case, Candice Fox).

What it does have going for it is a top-rate premise. Harry Blue is the top Sex Crimes investigator in her department. She’s a seasoned pro who’s seen it all. But even she didn’t see this coming: her own brother arrested for the grisly murders of three beautiful young women.

Harry’s been sent to a makeshift town in a desolate landscape-a world full of easy money, plenty of illegal ways to spend it, and a ragtag collection of transient characters who thrive on the fringes of society. A place where little grows, but evil flourishes. Looking into a seemingly simple missing persons case, Harry’s also been assigned to a new “partner.” But is he actually meant to be a watchdog? Still reeling from the accusations against her brother, Harry can’t even trust her own instincts, which she’s never doubted…until now.

Far from the world she knows and desperate to clear her brother’s name, Harry has to mine the dark secrets of her strange new home for answers to a deepening mystery-before she vanishes in a place where no one would ever think to look for her.

Unfortunately for Harry, her character grates on you, and that goes double for most of the characters in the book. Hardcore Patterson fans may feel differently.

Bleed Through, One of the Year’s Best Psychological Thrillers
Blade of Death, a Short Story Prequel to the Kyndall Family Thrillers