The Bottom Line: A titan among financial thrillers, this mind-blowing expose of corruption, fear and greed is an absolute must-read. 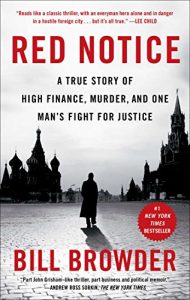 Although it’s been out since 2015, Red Notice is back in the limelight due to the investigations into the connection between Russia and the Trump campaign. If you’re looking for a smoking gun in this excellent novel, don’t bother, because it’s not there. Read this instead for a one-of-a-kind look into how a real empire was built in the ashes of the Soviet Union in the face of great personal peril.

Before he went to become the CEO of the wildly successful hedge fund Hermitage Capital, Browder grew up the son of American academics, and the grandson of Earl Browder, the leader of the US Communist Party in the 1930s and 40s. As a boy at a private boarding school, he was bullied mercilessly, but managed to emerge stronger for the experience.

After a series of early-career ups and downs, Browder manages to convince a billionaire to fund his effort to cash in on wildly undervalued preferred stock in privatized Russian companies. Long story short, he eventually became Putin’s arch-enemy, and barely escaped with his life.

As a narrator, Browder communicates the pure awe he feels as he navigates the wider world in search of his fortune, and the fear that nearly becomes his undoing as he takes one calculated risk after another. Red Notice will be a great read 100 years from now, but it’s never been as timely.