The Bottom Line: A sexy legal thriller about sex, politics and forensic science. 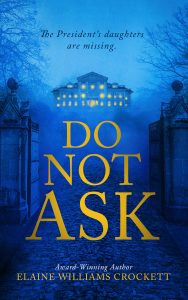 Supreme Court justice Warren Alexander may spend most of his days behind the bench, but the former FBI agent springs into action when the president’s adult twin daughters – along with his own aide – go missing. Curiously, first daughters Eden and Echo dismissed their Secret Service detail. But why?

Alexander’s son-in-law, Davis Rideout, traces his ancestry back to the Revolutionary War. But could he, a philandering bon vivant with a less-than-stellar reputation, be to blame for some of the trouble? The entire affair becomes wonderfully weird when Alexander discovers the twins’ private pleasure trove, and suspects that they have been up to foul play.

In Do Not Ask, legal thriller fans can look forward to plenty of heady judicial maneuvering, as well as some truly memorable courtroom action. However, what distinguishes the book from others in the genre is its thorough examination of DNA evidence in prosecution. In this regard, the second installment in Elaine Williams Crockett’s Warren Alexander series is considerably more complex than its predecessor. As Crockett indicates in her acknowledgements, she’s done her research, and it shows. Through the lens of this frisky crime thriller, Do Not Ask poses important questions about long-held beliefs about DNA evidence into question.