The Bottom Line: There’s no time like the present to catch up with this contemporary spy classic 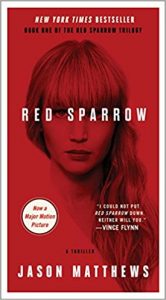 If you didn’t catch Red Sparrow when it first came out, there’s still time before the major motion picture is out of theatres and streaming on a device near you. And don’t just take my word for it. The fact that Hunger Games director Francis Lawrence and A-lister Jennifer Lawrence (no relation) poured their heart and soul into this novel penned by former CIA-operative Jason Matthews is recommendation enough.

In contemporary Russia, state intelligence officer Dominika Egorova has been drafted to become a “Sparrow”—a spy trained in the art of seduction to siphon out information from their marks.

She’s been assigned to Nathaniel Nash, a CIA officer who handles the organization’s most sensitive penetration of Russian intelligence. The two young intelligence officers, trained in their respective spy schools, collide in a charged atmosphere of tradecraft, deception and, inevitably, a forbidden spiral of carnal attraction that threatens their careers and the security of America’s valuable mole in Moscow.