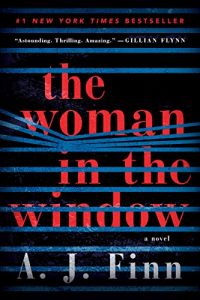 The similarities between A.J. Finn’s The Woman in the Window and Hitchcock’s Rear Window are, shall we say, undeniable. But just because a novel is highly derivative of a master work doesn’t mean it isn’t good. In this case, it’s damn good, and in some ways, an elevation.

Finn’s Anna Fox – a recluse in her New York City home – is one of the most engaging characters we’ve read this year. Is she sympathetic? Not exactly. Is she horrid? Absolutely not. But for anyone who has ever been inclined to voyeurism (I’m talking to you, 99% of humanity), she’s hugely relatable, and yes, flawed.

Fox spends her day drinking more wine than is good for a person, watching old movies and spying on her neighbors.Then the Russells move into the house across the way: a father, mother, their teenaged son. The perfect family.

But when Anna, gazing out her window one night, sees something she shouldn’t, her world begins to crumble and its shocking secrets are laid bare.

What is real? What is imagined? Who is in danger? Who is in control? In this diabolically gripping thriller, no one—and nothing—is what it seems.