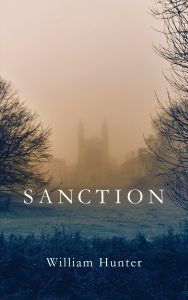 As William Hunter’s extraordinary political thriller begins, two assassins stalk Saudi Mohammad Haamid Ahmad, a distinguished professor at the University of Cambridge’s King’s College. But Ahmad, a frequent BBC pundit born of Saudi wealth, had made plenty of enemies over the course of his long career. His life outside the classroom is complicated, including work as an MI6 operative codenamed Shepherd, and allegedly, as a mole.

Would-be assassin Sean Garrett holds Ahmad personally responsible for a terrorist attack at King’s Cross Station that took the life of his grandfather and put his sister in a coma. Despite orders to simply extract information from the professor, Garrett won’t be satisfied with anything less than Ahmad’s life. But just before he can exact vengeance, contract killer David Laurent Gets to Ahmad first. Unfortunately, he leaves a witness: Sean Garrett.

On its own, the engaging cat-and-mouse game between Garrett and Laurent would be more than enough to make for a thoroughly satisfying narrative. But Hunter brings two additional aspects to what is already a dense political thriller: the ongoing investigation to catch the killers behind the King’s Cross Station bombing, and a related storyline stretching back to the 1940s, stemming from a Muslim regiment of the Waffen-SS, the armed wing of Hitler’s feared Schutzstaffel.

Hunter, a Cambridge alum who has spent substantial time in both the U.S. and the U.K., is keen observer of behavior in the multi-cultural melting pot that is London and Cambridge. Thankfully the plot isn’t muddle by intrusive or unwelcome politics, something that distinguishes Hunter from others working in the genre. Instead, the awe-inspiring glow of the university’s storied halls come alive with Hunter’s vivid interior descriptions, and so too does his grasp of technology’s occasionally dubious impact on crime (“forty eyes cemented to electronic screens,” enabling Laurent to enter unobserved).

When it comes to managing what is a rather large cast of compelling characters, Hunter’s dialogue is often on par with master of the genre John Le Carre, in that he manages to be both concise and entertainingly flip (“Montjoy stared blankly at Moore for one long moment before muttering, “F@%k.” “An adequate assessment,“ Moore replied.) While you may find yourself re-reading some of the more intricate links between past and present investigations, fans of historical fiction will applaud the way the converging threads come together in the book’s final chapters.