The Bottom Line: A timely, emotionally charged revenge thriller about a veteran sniper’s battle against the terrorists that killed his family. Highly recommended for military thriller fans. 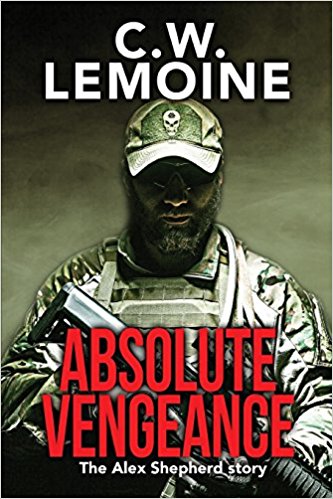 When terrorists hijack a school bus in New Orleans, Sheriff’s Office SWAT sniper Alex Shepherd risks his life to save his wife and daughter. Weeks later, he wakes from a coma only to discover that he was the sole survivor. Stricken with grief, he leaves for Syria to do what he does best: kill.

Told from Shepherd’s point of view, Absolute Vengeance is the perfect entry point for anyone who hasn’t yet read C.W. Lemoine’s outstanding Spectre series (Absolute Vengeance isn’t technically part of the series, although there are certain similarities). Lemoine, himself an air combat veteran, leaves it all on the table with a blow-by-blow account of the domestic terror attack that killed forty-four children, leaving him all alone in the world he had created stateside.

As riveting as the opening chapters are, the book really picks up steam as he travels to war-torn Syria, a soft-spoken volunteer who tells his new allies only that he’s a cop (they aren’t easily fooled: “This does not look to be the work of a simple policeman”).

As revenge thrillers go, there are essentially two kinds: those in which you hope the vigilante stops before he makes a huge mistake, and those in which you cheer the vigilante on. Absolute Vengeance is the latter, and that has everything to do with Lemoine’s sympathetic setup and choice of enemy (ISIS). There are no shades of grey here, and no anti-heroes: this is black and white, good versus evil. If you’re already on the Lemoine bandwagon, this will be comfort food. For the uninitiated, if you like Ben Coes and Marc Cameron or the late Vince Flynn, you’ll love Absolute Vengeance.