The Bottom Line: One of the year’s best thrillers. Simultaneously playful and edgy, Scissorman is a generous helping of dazzling contemporary detective fiction.

In Henry Chancellor’s Scissorman, a wealthy American living in London kicks off what promises to be the most celebrated annual scavenger hunt in history: the search for King Arthur’s mythical sword, Excalibur. 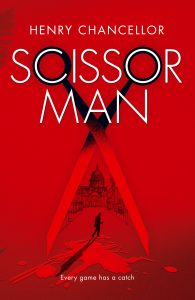 The book kicks off in dramatic fashion on July 13th, as nearly a million people watch a website hosted by the veritable game master, Callum Relph, as he buries the relic along with a current copy of The Times. For further proof that it isn’t a prerecorded hoax, he also posts to Twitter. As a final flourish, he offers an app containing clues for treasure hunters, as well as seven golden tickets, each worth half a million pounds sterling. As Relph hits the talk show circuit, he explains the sword’s lineage in detail, and indicates that he may host an annual scavenger hunt complete with corporate sponsorship.

The very next day, July 14th, likable London detective Frank Moke observes a far more somber occasion: the annual arrival of an envelope containing a photo from a book of gruesome German fairy tales. One such tale involves a tailor, the Scissorman, who snips off a boy’s thumbs as punishment for sucking them. The letters are torturous reminders of a string of unsolved crimes against children. This year, the letter arrived a day earlier than usual, but Moke doesn’t have much time to ponder the significance of the anomaly. He is soon called to investigate a report that a fox had been seen carrying a severed human head.

Early on, it’s clear that there’s a great deal of connective tissue between Moke and Relph, and with each passing day, Moke is met with a new surprise, many of them grisly. But in a novel chock full of clues and red herrings, Scissorman continues to deliver the unexpected in each succeeding chapter.

Throughout, Chancellor’s prose crackles with the playfulness of a contemporary YA thriller, which is perhaps why the juxtaposition of the elaborate scavenger hunt with the emotional heft of Moke’s 20-year-old case feels so fresh. While not a historical thriller in the strictest sense, Chancellor also weaves in just enough history – including art, literature and even architecture – to add a hefty dose of intellectual nutrition without over feeling bloated. While the book weighs in at nearly 700 pages, there isn’t an ounce of fat in the manuscript. It’s easy to imagine a business-minded editor splitting the novel into two or three separate books, but we can’t think of a better way to start a series.