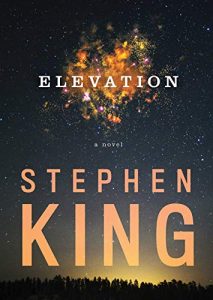 In Castle Rock – the fictional Northeast setting for many of King’s stories – a web designer confides in a retired doctor friend that he is losing weight. He’s not on a diet, nor is he really exercising. The weight is just coming off at a rate that can only be described as supernatural. By any measure, however, he looks exactly the same. In fact, everything in his life is exactly the same.

Except for a bitter feud with a couple living down the street.

Stephen King’s new novel, Elevation, is a departure from most of his 21st century work.  Is Elevation scary? Not particularly. It’s also not a horror novel per se. But it does deftly showcase the dark side of humanity, and longtime fans should read this for one reason: it’s good for you. While all Stephen King books contain morality questions, this one manages to be profound.

Longtime King fans may remember his novel Thinner (which was made into a terrible movie), in which a man is cursed by a gypsy and begins losing weight rapidly. For the record, this story feels entirely new.

While King continues to write short stories and novellas, his novels tend to be on the hefty side. Not so with Elevation, which is scarcely longer than a novella. But one thing that has set King apart from his peers is knowing when a story is really finished. On that note, Elevation seems exactly as long as it should be.

The Fisherman’s Daughter, a Mesmerizing FBI Thriller by Robin Barefield
Scissorman, One of the Year’s Best Thrillers