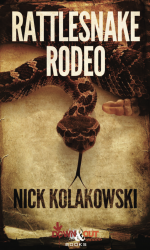 The Bottom Line: This rollocking action thriller set in the American west has much to say about wealth inequality. The sequel to Nick Kolakowski’s thriller about bounty hunter Jake Halligan picks up right after the first novel left off. In the first installment, Jake, sister Frankie and once-and-future wife Janine were kidnapped by a billionaire […]