The Bottom Line: An exacting, imaginative crime thriller that does wonders with the development of its singular heroine. Highly recommended. 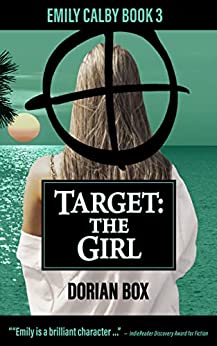 Dorian Box’s third Emily Calby series book comes full circle, as the now 20-year-old is gearing up to become an attorney. Series fans have followed Emily since she was a 12-year-old whose family was murdered in The Hiding Girl. Along the way, Emily discovers that she’s not only wired for survival, but also for revenge. In the second series book The Girl in Cell 49B, the teenager stands trial for her acts of vigilante justice, but finds a law library within the juvenile detention center that promises to be her salvation.

Target: The Girl finds Emily in St. Augustine, Florida. Armed with an undergraduate degree, she’s a first-year law student on full scholarship. Nothing about her is average. She’s younger than her classmates. She’s famous, or perhaps infamous, depending on your opinion. She even has fans who call themselves the Calbies as well as haters. And as a result of all she’s been through, her behaviors and thought processes are ruled by PTSD.

Box devotes ample time in the early going documenting Emily’s paranoia – or as she thinks of it, hyper-vigilance – in her day-to-day activities. Emily struggles to shrug off numerous oddities that most ordinary people wouldn’t give a second thought. For example, the way her professor’s demeanor changes when a woman named Christina stops by to get a mysterious envelope, or how Emily is convinced someone is moving her palm tree. Longtime readers will know Emily has earned the right to be careful, but the hardships she’s endured open the possibility that she’s imagining some of it. Box stacks these seemingly small observations up like kindling being prepared for a raging fire.

The thing that leads Emily to declare that she’s being stalked? A starfish missing two limbs. But unlike the first series book, there are no early acts of extreme violence. Box plays with expectations expertly en route to the book’s first shocking twist.

Series fans will welcome the return of Lucas, Emily’s longtime ally and spiritual guide. In early chapters, he proves to a voice of reason to calm her nerves (“You don’t need no gun…I’ll send you a door camera”). But as the narrative advances, he’s a voice of incredulity (“Gettin’ a dead cat in the mail ain’t distracting to you?”). There may be no relationship in contemporary literature quite like these two characters share, and every moment of interaction – whether in person or remote – is a highlight.