The Bottom Line: Pour yourself a glass of sherry and cozy up to this taut, engaging must-read medical thriller set at Oxford.  Voted the Best Medical Thriller of 2021. 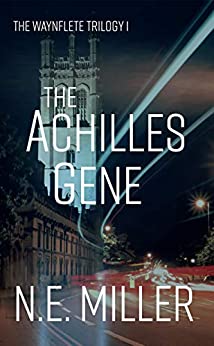 Giles Butterfield is a past-his-glory medical scholar fond of donning a past-its-prime tweed blazer at Magdalen, an Oxford college whose alumni include C.S. Lewis, Oscar Wilde, Sir John Betjeman and many other luminaries. His celebrated work on poxviruses is long forgotten, and his long-time financial patron has requested he switch his research to leukemia genes after losing a sister to the disease.

Giles, on the verge of his retirement to Italy, is writing a routine article about Nobel Prize winners for The Oxford Times. He typically enjoys writing about winners in different medical fields. But this current winner is not only in his own field, but also his old friend and colleague, Stephen Salomon. The prize winning topic: the creation of an artificial piece of DNA that could revolutionize cancer treatment.

But as Giles embarks on his usual exhaustive research for his articles, he begins to suspect that his former colleague is not a Nobel-worthy genius at all, but rather a massive fraud. Though the stakes for exposing such a high-level fraud could prove deadly, Giles sets off on a globe-trotting quest for the truth. What he uncovers is far bigger and more fantastic than he ever imagined.

But the real heft of this thriller is the scientific detail borne of Miller’s own background, which infuses the story with a verisimilitude born out of his own storied career as a medical scientist and geneticist best known for discovering the link between “good” cholesterol and protection against heart disease. His first article became the most cited paper in the almost 200-year history of The Lancet.

He began writing mystery thrillers while a Visiting Fellow and Waynflete Lecturer at Oxford University’s Magdalen College, tasked with delivering a series of public lectures on medical science and is a Fellow of both the Royal Society of Medicine and Royal Society of Arts. This scholarship is deeply infused throughout the novel. Highly recommended.