The Bottom Line: A next-level dystopian thriller that is among the year’s most exciting debut novels. 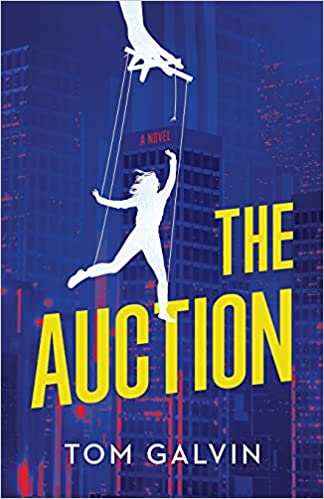 What if your financial earning potential was determined solely by an auction — and your future went to the highest bidder?

It’s 2050, and 22-year-old Sasha Cross is about to enter The Auction, where America’s Big 7 companies will bid on Series A candidates — considered to be the best and brightest young minds with the highest earning potential. Companies place bids on desirable candidates, and if they win those bids they receive 25 percent of the candidates income.

But Sasha, the daughter of one of the world’s most famous actresses — and a hounded celebrity herself — is considered to be Auction elite. But she wants nothing more than anonymity and the ability to decide her own fate. Yet in a nation that lives by the edict of “your value dictates what you will become,” falling out of line is not an option. And she will soon face decisions that could affect far more than her financial future.

Galvin, a former political journalist and technologist, has created a dystopian tale with human savagery reminiscent of The Hunger Games while set in a world more recognizable as our own. Galvin’s years in Washington covering the White House, and later as a tech strategist in Silicon Valley at the height of the Dot-Com bubble, are evident at every turn. Paparazzi, pizzerias and pretzel carts coexist with microchipped candidates whose every move is monitored, cities divided by zones and a pre-selected financial caste system.

The tension Galvin crafts between those who support the auction — the financial institutes, the media, the parents of the candidates who rely on the retirement benefits they receive from the Auction — and the candidates who see it as indentured servitude creates an almost palpable paranoia that will seep into your psyche and have you wondering what happens when life becomes nothing more than a commodity.