The Bottom Line: A soaring terrorism thriller that is as cinematic as it is breathtaking. Highly recommended.

Scientist Felix Breners has identified a potentially deadly microorganism in China. Unfortunately, he doesn’t plan to take his discovery to the authorities. If Breners’ intercepted communications are any indication, he may sell the information to the highest bidder, creating a bioterror threat unlike the world has ever seen. 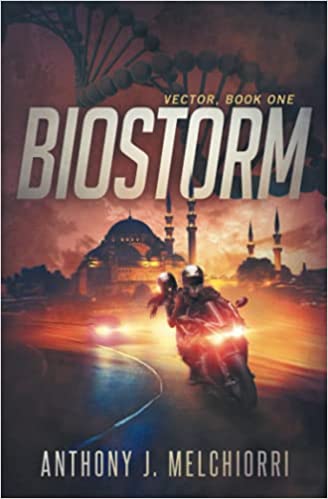 In the book’s spectacular opening, American operatives Alex Wolfe and Skylar Cruz stalk Brener as he attends a clandestine meeting in Istanbul’s Grand Bazaar. The plan comes apart as Russians arrive, and the scene erupts in gunfire. Unwilling to let the Russians have Breners or his lethal intelligence, Wolfe intervenes at his own peril.

Chaos ensues, leading to an adrenaline-fueled chase across the city that readers won’t soon forget.

Author Anthony J. Melchiorri’s tale of the effort to stop an imminent bioterror threat could not be more timely. In an era when much of the world has felt helpless at the mercy of a pandemic, riding along as Wolfe and Cruz risk their lives to stop a global catastrophe feels surprisingly cathartic.

While the pacing is tailor-made for an action-oriented audience, Melchiorri delivers just enough detail about science and setting for the novel to rise head-and-shoulders above its contemporaries. In The Grand Bazaar, you can just about smell the apple tobacco wafting through the air. In Vietnam, you can feel the humidity rising up from the rice paddies. But most importantly, Melchiorri’s real world experience in bioengineering and research renders the book’s scientific insights believable and absorbing.

This first installment bodes well for the series. Fans of Brad Thor and Dean Koontz will love Biostorm (Vector).